Farmers have found that low tunnels can work for overwintering crops of the Brassica, Allium, Chenopodia and Umbel families.  In winter 2011-12, we explored the potential for inexpensive production of Brassicas under low tunnels, and evaluated the effect of planting date on maximizing spring yield and quality.

We established 100’ long low tunnels over 5’ raised beds covered with black plastic mulch.  Our hoop system consisted of metal conduit bent over rebar spaced 2.5’ apart. We planted Siberian Kale and Mixed Mustard greens in three intervals:  the first round was seeded August 29 and transplanted September 26, the second was seeded September 14 and transplanted October 11, the third round was seeded September 26 and transplanted October 19.  A harvest from the first planting was done on November 3.  A layer of 1.25 oz row cover was applied on November 7, around the date of first frost, and a layer of 6 mil Greenhouse plastic was added on December 13. Greenhouse plastic and row cover were removed for all trials on March 21.  We harvested Brassicas for a second time in late March, and a third time in early April.

Survival of overwintered plants averaged over 90% for both kale and mustard, although it was slightly lower for the first planting date in mustard (average of 83%).  Due to the long growing season, bolting became an issue by the third harvest.  In kale, about 10% of plants were bolting at the second harvest, and 90% had bolted by the third.  In mustard, only 1% bolted at the second harvest, and 39% by the third.  In kale, the early planting dates were the first to bolt, but in mustard, the opposite was true. 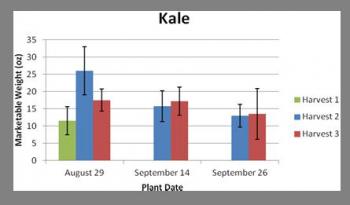 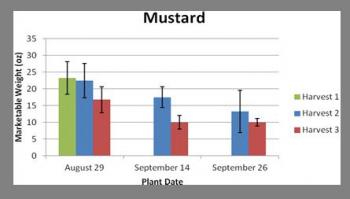 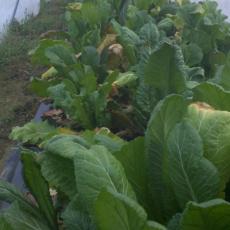 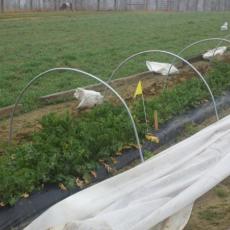 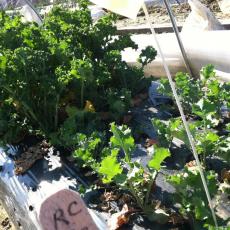