Farmers have found that low tunnels can work for overwintering crops of the Brassica, Allium, Chenopodia and Umbel families.  In winter 2011-12, the UMass Vegetable Program explored the potential for inexpensive production of onions and scallions under low tunnels, and compared varieties for spring yield and quality.

Onions were seeded in the greenhouse on August 18, 2011. We seeded Bridger, Candy, Top Keeper, Keepsake and Winter White Bunching (a scallion). They were transplanted October 11 into 5 foot raised beds covered with black plastic mulch. Drip irrigation was laid under the plastic, but was never used.  The beds were covered with low tunnels, consisting of metal conduit hoops that were placed five feet apart. On October 27, a row cover layer was put on the tunnel. The tunnels were then covered with 6 mil GH plastic on November 17. The tunnels were left undisturbed until March 21st, when the covers were removed. We harvested the scallions on April 10 and the rest of the onions on April 19.

Survival was very high for all varieties, at 100% for Keepsake and Top Keeper and over 95% for Bridger and Candy. Survival was slightly lower in the Winter White Bunching scallions, averaging 90%. 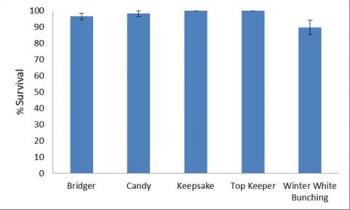 The bolting data was striking. We saw no bolting in the Winter White Bunching, Bridger, Keepsake or Top Keeper onions; however, 28% of the Candy bolted. At the time of harvest, most of the bolted Candy onions were still considered marketable because they had just begun to bolt. It should be noted though that if our harvest had been a week or so later, fewer of the Candy onions would have been marketable.
Most of the onions we collected were marketable, with only a few showing animal damage or appearing dramatically undersized.  This was true for all varieties.  In terms of marketable weight, Keepsake and Top Keeper produced the highest average yields, followed by Candy. 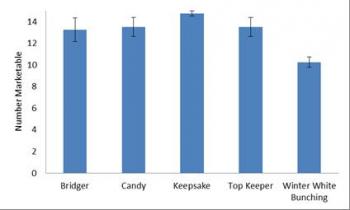 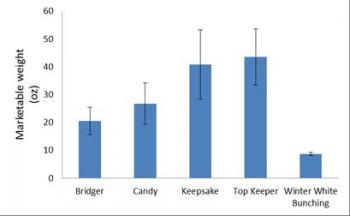 Based on this trial Keepsake and Top Keeper would be recommended varieties for overwintering.  They produced the highest marketable weights and were not susceptible to bolting.

A suprising finding of the trial was the amount of thrip damage found. It was a mild winter, and thrips were able to overwinter and emerge early in the low tunnels.  On April 10, 90% of our plants had at least 5 thrips per leaf.  As winter production expands, the survival of pests in greenhouses, high tunnels, and low tunnels is a major concern. 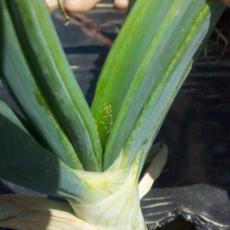 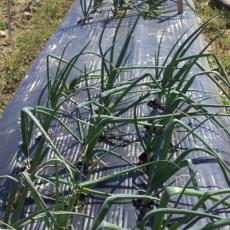 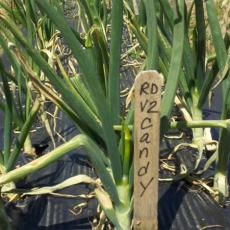 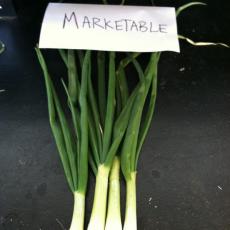