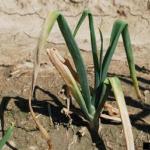 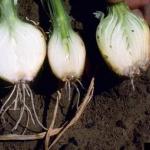 Fusarium basal rot of alliums, caused by the fungus Fusarium oxysporum f. sp. cepae, is a soil-borne disease that occurs worldwide. This disease affects all alliums, but is most economically significant on garlic and onions. Other Fusarium species, including F. culmorum and F. proliferatum, can also cause basal plate and/or bulb rot of onion and garlic, and many Fusarium species, including F. oxysporum f. sp. cepae can cause damping off.

Fusarium basal rot can cause disease in onion and garlic at any stage of maturity. The first symptoms appear as curving, yellowing and/or die-back of leaves, beginning at the tips and developing downward. Wilt may also occur. Red-brown discoloration and rot will develop at the root-basal plate margin, and stems and bulbs will develop reddish or reddish purple discoloration as the fungus moves up from the plate and into scales. Bulb tissue will appear brown and watery when cut open. White fungal growth may develop on the stem plate or between affected scales. Roots will eventually rot.

Symptoms may not be visible in the field, but may develop during storage. Garlic bulbs will become spongy or sunken, and will appear brown and watery when cut open. White, light pink or reddish fungal growth may appear on cloves or within rot cavities. Deep cracks form in cloves, followed by a breakdown of the clove tissue, resulting in crinkled cloves that are a fraction of their original size. The disease does not commonly spread from bulb to bulb in storage.

Fusarium oxysporum f. sp. cepae is a soil-borne pathogen that overwinters as chlamydospores (thick-walled survival spores) buried in the soil. When soil temperatures are optimal (25-29°C/77-84°F), chlamydospores will germinate and invade tissues of susceptible hosts, especially when tissues have been damaged by machinery or insects (especially onion maggot). Other insects, including seedcorn maggot, are attracted to infected bulbs in the field and can cause secondary damage to bulbs.

Crops that are affected by this pathogen: