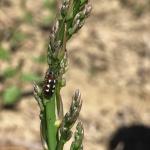 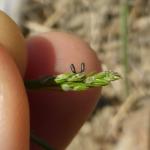 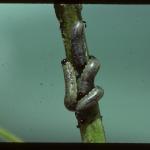 Common asparagus beetle is blue-black, shiny, smooth and 6-9 mm (⅜ inch) long. The most distinctive markings are three large cream-colored, squarish spots with red margins along each wing cover. The head, legs and underside are blue-black, and the thorax is reddish. Eggs are dark brown, laid standing on end in rows along the spears, with 3-10 in each cluster. Larvae are wrinkled, plump, hump-backed, and dull gray or brown with black head and legs. They go through four growth stages (instars) and grow up to about 8 mm (⅓ inch). Pupation occurs in the soil, and pupae look similar to adults except for yellowish coloration.

Adult beetles overwinter in field borders or within asparagus fields. Sheltered sites such as under bark or in the stems of old plants are preferred. Some burrow into the soil. Adults emerge in early May and colonize asparagus fields to mate, feed, and lay eggs.  Eggs hatch in 3-8 days, depending on temperature. Larvae feed in spears and ferns, and when mature, drop to the soil to pupate. There are 2-3 generations each season, with the first generation producting the most eggs. Second generation larvae feed in ferns. The temperature threshold for larval development is 10°C (50°F). In September, new adults search for overwintering sites.

Adult feeding on spears causes scarring and browning. Presence of eggs and feeding damage can render the crop unmarketable. Both adults and larvae feed in ferns and can reduce the plant's ability to build resources for a strong crop the following spring. Damaged plants are also more susceptible to infection by the fungal pathogen, Fusarium.

The most important natural enemy of common asparagus beetle is a tiny parasitic wasp (Tetrastichus asparagi) that attacks the egg stage. Wasps kill eggs by feeding on them. These parasitoids also lay their own eggs inside the beetle eggs. The immature wasps grow inside the beetle larvae, killing them when they pupate. Studies have found >50% of eggs killed by feeding and half of the surviving larvae parasitized. Providing a nearby nectar source such as umbelliferous flowers may enhance wasp populations.