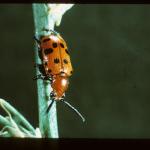 The spotted asparagus beetle originated in Europe, and spread throughout North America after it was introduced in the late 1800s.

Spotted asparagus beetle (Crioceris duodecimpunctata) is reddish orange or tan, 6-8 mm long, with six black spots on each wing cover (hence its other name, 12-spotted asparagus beetle). It feeds only on asparagus, and tends to be less abundant than the common asparagus beetle, C. asparagi. Adults take flight quickly when disturbed. Eggs are greenish, glued singly on their sides to leaves and are laid on fronds, not on spears. Female plants with berries are preferred, and the widespread use of all-male hybrids that do not produce berries may have reduced populations. Larvae are pale yellow or orange, lighter in color than those of common asparagus beetle, plump, with a dark thorax. They feed almost entirely inside the berries, but need 2-4 berries to complete their growth, so may be found on fronds as they search for berries.

Spotted asparagus beetles overwinter as adults in field edges and in asparagus fields, usually in protected areas such as hollow asparagus stems and under bark. Although adults emerge in May (about 1 week later than common asparagus beetles) and move into fields to feed, egg-laying does not begin until ferns develop. Larvae feed on berries, then drop to the ground to pupate when they are fully grown.

Adults chew on emerging spears, creating small pits which make the spears unmarketable. However, populations are often too low to cause commercial damage. Later in the season, they feed on leaves and stems. Larvae only feed inside the berries, which affects seed production but does not hurt the plants.

A tiny (< 1/8 inch ) metallic green wasp, Tetrastichus asparagi (Hymenoptera: Eulophidae), parasitizes asparagus beetle eggs. These may be observed during scouting. They have been known to provide very effective control, parasitizing up to 70% of the eggs. Lady beetle larvae and other predators may also be active; they will consume both eggs and larvae as well as asparagus aphids. Use selective insecticides to preserve these natural enemies.