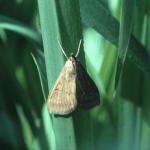 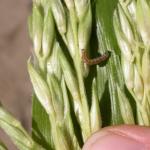 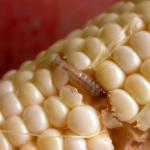 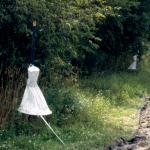 European corn borer (ECB) is a resident pest that has 2 generations per year in southern and central New England and 1 generation in northern New England. Sweet corn is one of over 200 crop and weed host plants of this pest; other vegetable crops affected include bean, pepper and potato.

In peppers, ECB can cause considerable damage when present; however, distribution of ECB in pepper fields is patchy and some farms, especially those in areas where farms are few and far between, may never have issues with this pest in pepper. For farms in the Connecticut River Valley and southeast Massachusetts, unsprayed pepper fields can range from a 10-100% infestation.

See the Sweet Corn Insect Management Field Scouting Guide for photographs and step by step description of life stages, damage, monitoring, biological control and thresholds for ECB along with other corn pests.

ECB moths are about ¾ inches long, light brown in color with lighter bands on the wings. Eggs are white and are laid in flat masses on undersides of leaves. Larvae are light colored, with a pattern of small dark spots on each segment. The head capsule is flattened and black or dark brown. The dark head capsule distinguishes ECB larvae from pepper maggot larvae, another pepper pest, which are completely white. Newly hatched larvae are 1/8 inch long and full-grown larvae are ¾ -1 inch long.

In pepper, it may be difficult to identify an ECB infestation without destructively monitoring fruit. When ECB larvae are entering pepper fruit, they leave a pile of light brown frass on the fruit surface, which is the only sign of infestation until, in some cases, 2-3 weeks later, bacterial soft rot may cause fruit decay.

Larvae overwinter in crop debris and pupate in the spring. The first generation of ECB, which affects only corn and not pepper, emerges as adults in late May or early June. Adults mate in weedy or grassy areas, and 3-7 days after emergence, depending on temperature, females begin to lay flat, white egg masses on the underside of leaves in early corn. Eggs hatch in about 5-7 days (100 degree days, with a base temperature of 50°F). Larvae feed in the whorl, leaving pinhole damage, and in the succulent emerging tassel creating brown frass in the florets. These newly emerged larvae feed on leaf tissue for a short period and then tunnel into stems or fruit. ECB larvae often burrow into the fruit beneath the calyx. In addition to this direct injury, ECB also causes premature fruit ripening and fruit rotting by pathogens entering the wound.As the corn matures, these larvae move downward, bore into the stalk and tunnel into ears through the side or tip. Pupae form inside larval tunnels in the stalk.

A second flight begins in mid-July to mid-August, depending on location and the seasonal growing degree day accumulation (beginning of second flight at 1400 GDD; first eggs at 1450 GDD; egg hatch at 1550 GDD). The second generation of ECB affects peppers as well as corn - pepper is affected only by the second generation because larvae attack pepper fruit larger than ½ inch across, and plants do  not bear fruit in time for the first ECB flight. In corn, when second generation moths are active during silking, eggs are laid on leaves near the ear and larvae move directly into the ear by tunneling through the husk or down the silk channel. In pepper, eggs are laid on undersides of leaves, and the young larvae tunnel under the fruit cap to enter the fruit, where they will remain throughout the winter.

ECB flight can be monitored with two Scentry Heliothis net traps placed at least 50 feet apart in weedy borders of corn fields with the bottom of the trap at weed height. In New England, there are two strains of ECB present - New York strain (EII) and Iowa strain (ZI). One trap should be baited with an NY (EII) lure, and the other with an IA (ZI) lure. Check traps once or twice per week and replace lures every 2 weeks. In peppers, begin checking traps in the 3rd week of July.

Corn: Once flight is detected, corn with newly emerging tassels should be scouted weekly for the presence of ECB larvae by inspecting the tassels of 50 to 100 plants, in groups of 5 to 20 plants throughout the field. Treat if more than 15% of the plants have one or more larvae present.

Check state sweet corn IPM reports for ECB activity, or use pheromone traps for monitoring adult flight. Make a first application 1 week after moth count equals or exceeds 7 moths per week and fruit are present on the plants. Discontinue sprays 1 week after moth counts drop below 21 moths per week. The spray interval depends on the residual period of the insecticide used as well as weather conditions and pest pressure. Use shorter spray intervals during peak flights and while pheromone trap catches exceed 150 moths per trap weekly (this rarely happens).

Corn started under plastic or row cover often reaches silk stage during the first flight of ECB, such that the first eggs hatch during ear development. As a result, ears can be heavily infested by this pest even though scouting in early tassel did not show any feeding damage or larvae. If plants are in silk and moths are active, it is important to protect developing ears. This is also true for late season corn during the second ECB flight, especially when other caterpillar pests are absent. Genetically modified Bt hybrids that that express the insect toxin found in Bacillus thuringiensis (Bt) generally provide adequate defense against ECB and may not require additional insecticide applications, but scouting is still recommended to assess ECB and other pests.

Pepper: Insecticide applications should begin one week after trap counts reach 7/week (1/night). This week-long delay provides an ample time for mating, egg-laying and egg hatch to occur before the larvae can enter the fruit. During the period when ECB moths are active, usually through August, a regular schedule of insecticide applications should be maintained. At the end of the flight, when trap captures drop below 20 per week, insecticides should no longer be needed.

Corn: Timing sprays for tassel emergence reaches larvae in the whorl and the young tassel. A sprayer configuration with one nozzle directed into the tassel and a single drop nozzle to the upper parts of the plant gives the best control. At high levels of infestation, two applications may be needed to provide control. Use of selective products to control ECB will conserve natural enemies of aphids and ECB.

Pepper: Intrepid (methoxyfenozide, an insect growth regulator) controls ECB while conserving natural enemies. It is easier on parasitoids than any other product other than Bt. ECB larvae will stop feeding immediately after being treated with Intrepid, but will take several days to die. Use shorter spray intervals during peak flights and while pheromone trap catches exceed 150 moths per trap. Choose selective/microbial products whenever possible to preserve beneficials and reduce the chance of aphid outbreaks. Pyrethroids may cause aphid outbreaks by eliminating their natural enemies. If simultaneously controlling for pepper maggot, use of an acephate product for the first ECB spray will also control the end of pepper maggot flight.

The intervals recommended for insecticide applications depend on the active ingredient used.

For more details on registered products for ECB in both corn and pepper, please visit the New England Vegetable Management Guide website.

Natural enemies of ECB include the twelve spotted ladybeetle and the parasitic wasp Trichogramma ostriniae. Ladybeetles preys on ECB eggs and small larvae. Trichogramma wasps attacks ECB eggs; the release of these wasps can reduce the need for insecticide applications.

Trichogramma wasps can be used similarly in corn and peppers. Because Trichogramma attacks ECB eggs only, it is critical to understand ECB flight timing and wasp release timing. For complete information about use of Trichogramma in corn, please see the Sweet Corn Insect Management Field Scouting Guide. Higher rates are needed to control ECB in pepper than in corn, because ECB tolerance in pepper is low due to larvae directly attacking fruit. In pepper, begin releases the week that ECB flight begins, then release weekly for a total of 4 weeks. Release 90,000-120,000 wasps per acre per release, depending on the level of infestation and the level of control desired. Spread cards out throughout your pepper block. After 4 releases, the wasps will continue to reproduce in the field.

Trichogramma wasps can be ordered from IPM Laboratories in Locke, NY, (315) 497-2910, www.ipmlabs.com. Order well in advance.

If using Trichogramma in combination with insecticides, choose a selective material that will not kill wasps.