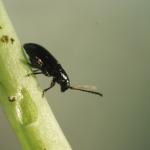 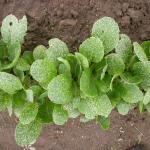 The crucifer flea beetle is uniformly black and shiny, about 2 mm in length, while the striped flea beetle has two yellow stripes on its back. These flea beetles only feed on brassica crops; those found on corn or solanaceous crops are different species. Though they prefer the tender leaves of Brassica rapa and B. juncea crops such as arugula, tatsoi, mizuna, bak choi, and mustard, they will also feed on the more waxy Brassica oleracea crops such as broccoli, cabbage, kale, and collard.

Adults spend the winter outside the field, in shrubby or woody borders, and move into fields in May and begin feeding and mating. Eggs are laid in soil near the plant. Larvae will hatch in 11-13 days. Larvae feed on root hairs and pupate underground. . After about 2 weeks, the larvae will pupate, and emerge after another week as the next generation of adults in mid-June. This cycle repeats itself and a second summer generation emerges in late July to feed on fall brassica crops before moving outside of the field to forested areas for the winter. Feeding declines in September.

Maturing plants should be scouted frequently. When plants are young, an average of 1 beetle per plant or 10% average leaf damage is a reasonable threshold for chemical intervention. Because brassica crops differ greatly in susceptibility and attractiveness there is no fixed economic threshold that applies to all crops. Beetles can be difficult to count, as they hop when disturbed. Yellow sticky cards placed in the canopy or feeding damage can be used to determine beetle populations. Control if damage to cotyledons or seedlings is stunting growth, or if damage to greens will reduce marketability.

Several synthetic pyrethroids (Group 3A), carbamates (Group 1A), neonicotinoids (Group 4A, either as foliar or soil drench), and diamides (Group 28) are labeled for flea beetle in brassicas. Avoid repeated use of one type of chemistry over multiple generations or using both soil and foliar applications of the same group. Systemic insecticides can provide longer-term control against damage, although beetles may still be seen when scouting. Diamide products (Exirel and Harvanta for foliar applications, Verimark for soil), are systemic and provide control against flea beetles as well as other brassica pests like caterpillars, cabbage aphid, and, if applied to the soil pre-plant, cabbage root maggot. Be aware that systemic insecticides may have longer days-to-harvest intervals.

For organic farmers, the choice of effective chemistries is limited to spinosad (Entrust), Surround WP (kaolin clay), and pyrethrin (Pyganic). In UMass trials, Entrust showed the greatest efficacy in suppressing flea beetles and reducing damage. Pyrethrin (Pyganic EC 5) showed poor to moderate efficacy in our trials but is reported by growers to cause a significant short-term knockdown. Abby Seaman, NYS IPM, found in 2013 that Entrust, as well as both Venerate and Grandevo, two OMRI-approved bioinsecticides, were all found to significantly reduce damage from flea beetle on cabbage but pest pressure was very low in that study. Growers often hesitate to use Surround because of difficulty mixing and spraying— some growers have found that using a masonry or sheet-rock drill to mix up the material in a 5-gallon bucket before adding to a backpack sprayer works to get the clay into suspension. If you want to apply Surround using a tractor-mounted sprayer you must have mechanical agitation or the material will not go into suspension and it will clog up your nozzles. It is probably worth figuring out how to do this if you struggle with getting your early season transplants to survive the onslaught of flea beetles, and it can also be useful in protecting cucurbit transplants from striped cucumber beetles, which vector bacterial wilt.