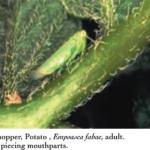 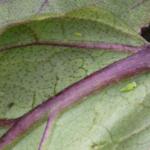 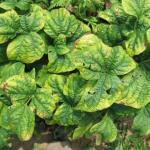 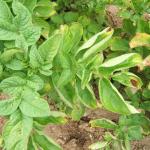 Potato leahoppers overwinter in the Gulf Coast states and move north in spring, arriving in New England around from early to mid-June. It is easy to overlook them in the crop, as they are small and well hidden. Adults are about 1/4 inch long, light yellow-green, and fly up from foliage when it is disturbed or shaken. Eggs are inserted into veins and petioles of leaves and hatch, on average, in about 10 days. Nymphs usally feed on the underside of leaves, and are bright green, wedge-shaped and very fast-moving. They tend to move sidewise, crab-like, on the leaf surface. Presence of nymphs indicates an established population. Two or more generations may occur after after adults arrive, until killed by frost. Note that aster leafhopper adults are a more drab olive green in contrast to the light green of potato leafhopper adults.

Potato leafhopper is primarily a pest of potatoes and snap or dry beans, but also can affect eggplant and other vegetables, raspberries, apple and other fruits as well as field crops including alfalfa, cowpea, soybean and red clover. Legumes are a favored host. Weeds that support leafhoppers include smartweed, pigweed, shepardspurse, and carpetweed. Adults and nymphs feed by inserting a needle-like beak into the plant and feeding on phloem or mesophyll tissue.  Athough they are not known to transmit plant pathogens, PLH inject a toxin into the plant. Plant resiration is increased, photosynthesis is decreased, and the conductive tissues the move the products of photosynthesis to other parts of the plant are disrupted by leafhopper feeding.   In potato, leaf veins turn yellow, leaves curl, then leaf margins turn brown and brittle, followed by death of entire leaves. In beans the leaf turns mottled brown and curled, as if infected with a disease, before dying completely. Both adults and nymphs cause damage. Plant injury and yield loss can be significant. In potato, yield loss occurs even before the development of obvious symptoms. Green beans are very susceptible, especially when they are infested prior to flowering.

Because low numbers of adults or nymphs cause injury and reduce yield, it is important to protect plants before adult numbers are high and before nymphs build up. Left uncontrolled, potato leafhopper will continue to build up. It is difficult to count adults since they fly quickly when foliage is shaken or disturbed. Sweep nets can be used to detect adults – treat if more than 1 adult is found per sweep.  If you see one adult per plant fly upwhen you shake the foliage, a damaging infestation level is present.  Once nymphs develop, they can be monitored by visually inspecting lower leaf surfaces on lower leaves.

In potato and eggplant, some materials registered for Colorado potato beetle (CPB) adults will also control leafhopper, including neonicotinoid foliar sprays such as Admire Pro or Assail. These and several other carbamate, synthetic pyrethroid, and organophosphate products are also registered for leafhopper in potato, eggplant, and snap beans. Refer to the New England Vegetable Management Guide for registered products. While the classes of insecticides listed above generally have high toxicity to bees, there are variations within classes; for example, Assail (acetamiprid) has a lower toxicity to bees (rated as ‘medium’) while most neonics are rated as highly toxic to bees. Sivanto (flupyradifurone) is a new product in a novel class of chemistries, the butenolides, that works against sucking pests, including PLH. It is also labeled for CPB control. This new active ingredient is being touted as an alternative to neonicotinoids, and has been given a bee toxicity rating of Low.

For organic growers, PyGanic EC5.0 (pyrethrin) has been shown to be the most effective product for reducing leafhopper numbers and damage. Pyrethrin is a contact insecticide, so it must hit the insect to kill it and therefore good coverage is important, especially of the leaf underside where nymphs are found. Pyganic breaks down quickly in sunlight, so the residual period is short. Spraying late in the day or in the evening may provide better control than spraying early in the morning. Products containing azadiractin have also demonstrated efficacy against leafhoppers (especially in fruit systems) and could be used in tank-mixes or in rotation with Pyganic EC5.0. Don’t wait for numbers to build up. Row cover can be used to delay PLH infestation in snap beans until flowering, when plants are less susceptible to damage. Using row cover is recommended on young eggplant, as it protects from flea beetles, CPB and PLH.

Pollinators and other beneficials

Although bees do not forage extensively in beans or potatoes, they may be active in the field when these crops or the weeds within the crop fields are flowering. During that time, selection of products with lower toxicity to bees is advised. Look for toxicity information on the label, and also in the New England Vegetable Management Guide Table 26, and in the products listed for each crop and pest. For conservation of both native pollinators and honeybees, control weeds in the crop and avoid drift onto flowering borders or crops. However, encouraging some flowering areas in the margins is good for supporting pollinators before and after crops bloom. These can also be a nursery and refuge for beneficial predators and parasites of insect pests.