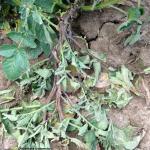 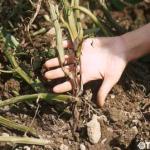 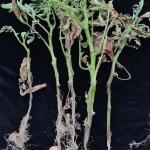 Technically, the term “blackleg” applies only when the infection arises from infected seed potatoes. When it is not the result of infected seed, it is called aerial stem rot; however, the term blackleg is commonly used in diagnosis of both situations. This disease is caused by bacteria in the genera Pectobacterium and Dickeya (both formerly Erwinia).  They also cause soft rot of tubers.

Blackleg begins as watersoaked lesions at the base of the stem. The lesions eventually coalesce and turn dark as the infection progresses up the stem. The stem pith decays and darkens, and vascular tissue in and above the lesion may be discolored. In wet weather, the decay tends to be slimy; in dry weather, stems may be hollow and desiccated, particularly if Dickeya is present. Leaves on affected stems may be wilted, chlorotic, or brown, and plants may collapse. Secondary infections may begin higher up on stems. Tubers may also rot. Dickeya causes damage at a lower inoculum level than Pectobacterium and so generally causes a more aggressive form of the disease.

Infected seed potatoes may come from infected fields or may become infected during processing. Both bacteria can live in tuber lenticels without causing disease. The bacteria become active when environmental conditions are right, and then disease occurs. Blackleg can occur at any time during the growing season, but it is favored cool, wet conditions at planting followed by warmer weather. Stand loss may result if seed pieces begin to decay before shoot emergence. In established plantings, the infection can move from tubers up the stems through the vascular tissues. When infected tissues break down, bacteria are released into the soil and travel in soil moisture to other plants. Pectobacterium and Dickeya do not survive more than a few months in soil; however, they may survive in crop debris, perennial weeds, or infected tubers allowed to overwinter and sprout the following spring.

In aerial stem rot, the bacteria may be present in the field in weeds or on crop debris and enter plants through wounds or leaf scars. Bacteria may also be spread by insects or splashing water. The decay usually does not travel downward into the tubers. Development of aerial stem rot is favored by warm, wet weather.

Dickeya and Pectobacterium may both be present in a single seed lot. Little is currently known about how the two species interact.