There are many diseases that affect potato tubers, so as you sort through your potato harvest each year, take a moment to check for disease symptoms. Proper identification will help you decide which tubers will store well and which should be sold as tablestock, and will give you a better idea of which soil-borne diseases are present in your fields, improving your future crop rotations.

Common scab produces tan to dark brown, circular or irregular lesions which are rough in texture. Scab may be superficial (russet scab), slightly raised (erumpent scab), or sunken (pitted scab). The type of lesion is dependent on potato cultivar, tuber maturity at infection, organic matter content of soil, strain of the pathogen, and the environment. Common scab is controlled or greatly suppressed at soil pH levels of 5.2 or lower, though a closely related but less common species of Streptomyces known as acid scab can survive down to 4.0. 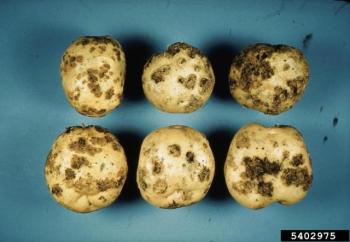 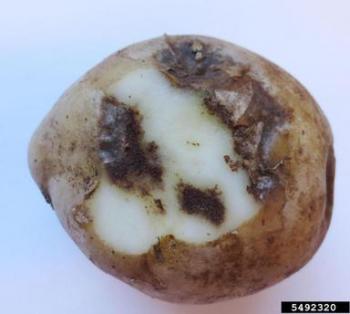 Fusarium dry rot causes internal light to dark brown or black dry rot of the potato tuber. The rot may develop at an injury site such as a bruise or cut. The pathogen penetrates the tuber, often rotting out the center. Extensive rotting causes the tissue to shrink and collapse, usually leaving a dark sunken area on the outside of the tuber and internal cavities. 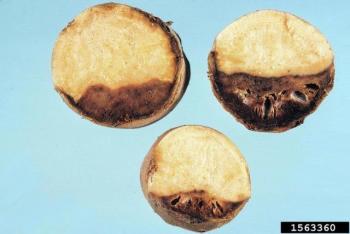 On potato foliage, symptoms of black dot are nearly indistinguishable from those of early blight. On tubers, it produces tiny black sclerotia (fungal resting structures). Symptoms on tubers can be easily mistaken for silver scurf. Under a 10X lens, tiny black sclerotia are visible on the surface of the affected tissue.

Silver scurf affects only tuber periderm (skin). Lesions are initiated at the stolon end as small pale brown spots which may be difficult to detect at harvest but will continue to develop in storage. In storage, lesions may darken and the skin may slough off and many small circular lesions may coalesce to form large affected areas. Tubers may also become dried out and wrinkled due to excessive moisture loss in storage.

Black scurf is purely cosmetic and does not reduce yield, even in storage. Irregular, black hard masses on the tuber surface are overwintering structures (sclerotia) of the fungus. Presence of these sclerotia may be minimized by harvesting tubers soon after vine-kill and skin set. While the sclerotia themselves do not cause damage, they allow the pathogen to survive in the soil and serve as evidence of its presence. In cool, wet soils, R. solani can cause dark, sunken lesions on underground sprouts and stolons. These lesions can cut off the supply of nutrients, killing tubers, or can reduce the transfer of starches to the tubers, reducing their size. Cankers can also form on the tubers themselves, usually at the stolon or in lenticels. Cankers on tubers which can be small and superficial but may be large, sunken and necrotic. 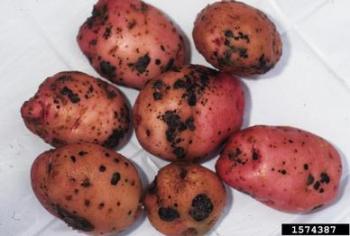 Pink rot infections start at the stolon end and result in rotten and discolored periderm with a clear delineation between healthy and diseased tissue. When exposed to air, tuber flesh turns pink and then brown-black. Pythium spp. that cause leak infections invade tubers through harvest wounds and continue to develop in transit and storage. Infections result in internal watery, gray or brown rot with well-defined red-brown lines delineating healthy and diseased tissue. 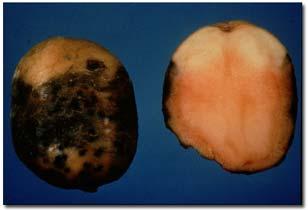 Late blight affects potato foliage and tubers. Foliar symptoms start with brown to black, water soaked lesions on leaves and stems which produce visible white sporulation at the lesion margins under humid conditions. Whole plants and fields may collapse rapidly. Tuber infection is initiated by sporangia from foliage being washed down into the soil and usually begins in wounds, eyes, or lenticels. Lesions are copper brown, red or purplish and white sporulation may occur on tuber surfaces in storage or cull piles. Infected tubers are susceptible to infection by soft rot bacteria which can turn entire bins of potatoes in storage into a smelly, rotten mass. 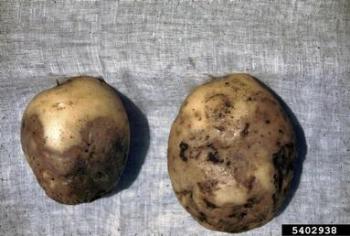 Potato Virus Y (PVY) can cause necrotic ring spots on tubers, depending on which strain of the virus is present, which potato variety is grown, and the time of infection. Affected tubers have roughened rings of darker brown or reddened skin. Necrosis beneath the rings may extend into the tuber flesh. Necrotic symptoms in tubers often increase after storage. Potato varieties vary in their susceptibility to PVY and the symptoms they exhibit on foliage and on tubers; Yukon Gold is particularly susceptible to tuber necrosis. If you think you are seeing symptoms of PVY on foliage or tubers, please contact Sue at sscheufele@umext.umass.edu. 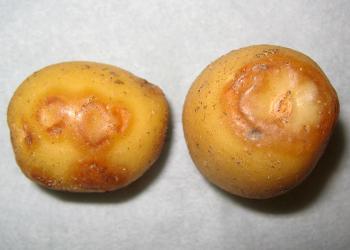 Black Heart is caused by lack of oxygen during storage which causes the tissue to die from the inside out and turn black. The condition is not reversible but if you notice it quickly and correct your storage conditions you can prevent the whole crop from being affected.

Brown Center and Hollow Heart are internal physiological disorders of potato which often occur together. Brown center is an area of dead pith cells which turn brown, while hollow heart is a star- or lens-shaped hollow area in the center of the tuber. These disorders make fresh-market tubers unattractive and can reduce repeat sales. Severe hollow heart negatively impacts the quality of chip-processing potatoes and can result in shipments not making grade. Both disorders are related to stress, and occur at a higher incidence when growing conditions abruptly change during the season. Brown center and hollow heart likely form during tuber initiation but could also form during tuber bulking. If the disorder occurs during the early part of the season, then it is most often preceded by brown center and forms in the stem-end of the tuber, while late-forming hollow heart usually occurs near the bud-end with no brown center symptoms occurring. Conditions such as when soil temperatures are less than 56°F for 5–8 straight days, or when available soil moisture is greater than 80% cause brown center to start forming. Incidence of brown center and hollow heart also increases with periods of stress caused by high or low soil moisture, especially if heavy rains occur suddenly after a dry spell. Large tubers are more prone to develop the disorder, so using closer spacing and making sure not to have too many skips in the row can reduce incidence of brown center and hollow heart. There are also differences in the susceptibility of potato varieties: ‘Atlantic’, a widely grown potato for chip processing, is relatively susceptible to both disorders. In ‘Russet Burbank’, susceptibility to both brown center and hollow heart is highest soon after tuber initiation when the tubers are small. 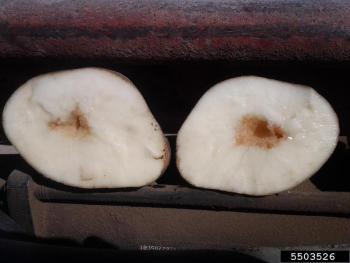