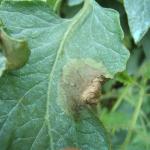 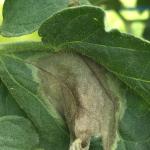 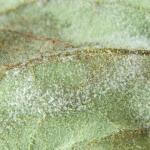 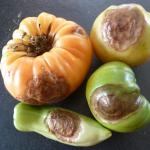 Late blight, caused by the fungal-like organism Phytopthora infestans, is the most severe disease of potato and tomato. The pathogen caused widespread starvation and immigration during the Irish potato famine in the 1840s. The pathogen spreads easily on wind and rain and is capable of destroying entire fields in a few days. Late blight is extremely destructive when not managed, quickly killing foliage and infecting fruit and tubers.

The most common symptoms on tomatoes are sunken, dark green or brown lesions on leaves and brown lesions on stems, with white fungal growth developing under moist conditions. Classic symptoms are large (at least nickel-sized) olive-green to brown spots on leaves with slightly fuzzy white fungal growth on the underside when conditions have been humid (early morning or after rain). Sometimes the lesion border is yellow or has a water-soaked appearance. Brown to blackish lesions also develop on upper stems. Firm, brown spots develop on tomato fruit.

P. infestans in the Northeast survives in potato tubers saved from last year for seed and in cull piles or soil that did not freeze during the winter.  The pathogen does not overwinter in tomato and is not seed-borne. In more southern regions, the pathogen produces long-lived sexual spores (Oospores) that survive in infected  crop debris and the soil. Sporangia from these southern areas are spread long distances bywind and wind-driven rain. Clouds protect spores being dispersed in wind from the killing effect of ultraviolet radiation. Phytophthora infestans needs cool (below 77 F), wet weather. Hot, dry summers, like 2010 are not conducive to late blight development. An exception would be where plantings are located where fog occurs periodically. The late blight pathogen has recently undergone changes in Florida that affect disease occurrence there and in other eastern states. Diseased tomato plants in south Florida have survived cold periods in winter allowing the pathogen to persist. Late blight has also been active into the spring as late as May indicating an increased tolerance for warmer temperatures. This means a potential source of inoculum persists until crops are being produced north of Florida and a ‘green bridge’ exists for the pathogen to progress on until it reaches the northeast.

In 2009, a new genotype of late blight caused by Phytophthora infestans, US22, caused a disease epidemic throughout the Northeast. First reports of the pathogen were recorded in late June, the earliest incidence of widespread disease ever observed in our region. US22 was detected in tomato plants for sale in garden centers in numerous states by extension specialists. Late Blight has occurred in New England sporadically in recent years and different strains of the pathogen have been responsible: US11 (1994-1998), US8 (1992-2010), and US17 (1996-1997). These genotypes of the late blight organism differ in host aggressiveness and fungicide resistance. US22 is more virulent on tomato, while US8 is more aggressive on potato. Environmental conditions in June and July of 2009 were extremely conducive for disease development as the late blight organism is favored by cool and wet weather.  In 2009, growers were required to make numerous fungicide applications of the best materials on a shortened schedule to harvest marketable fruit. 2010 was much warmer and drier and late blight epidemics did not develop although both US22 and US8 were observed in localized outbreaks.