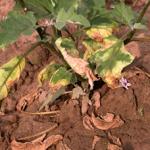 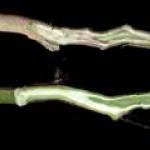 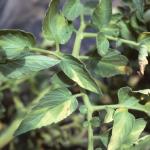 Verticillium wilt, caused by two species of soil-borne fungi-Verticillium dahliae and Verticillium albo-atrum, infects more than 200 species of plants, including many vegetables. V. albo-atrum prefers cooler soils while V. dahliae can become a problem in greenhouse vegetable production. Sometimes, both species will occur in the same field. These pathogens are soil-borne and can persist in soils for long periods of time without a susceptible host, making disease management difficult. Verticillium wilt can affect many vegetable and ornamental crops and has many weed hosts as well, but eggplant is particularly susceptible.

A yellowing of lower leaves followed by wilting is the first sign of disease. Lesions have a characteristic V-shaped pattern which is widest at the leaf margin. Brown, necrotic tissue within lesions is surrounded by a large, irregular area of yellowing due to a systemic leaf toxin produced by the fungi. Symptoms are subtle and may be confused with insufficient moisture or other vascular wilts.  Because Verticillium affects the water-conducting vessels, symptoms can appear on one side of the plant or on one side of a leaf. Symptoms of the disease therefore initially appear in only one branch or one side of a leaf because other water-conducting “pipes” remain un-colonized and can conduct water normally. Leaf necrosis is followed by wilting, stunting, and plant death. When the stems of infected plants are cut lengthwise, the vascular tissue exhibits a brown discoloration.

Vascular discoloration and one-sided wilting can also be symptoms of fusarium wilt, caused by another soil-borne fungus in the genus Fusarium. It is important to identify which of the two fungi is infecting your crop, because their host ranges are quite different. Verticillium wilt tends to affect a wide range of hosts and can infect many unrelated plants. Fusarium spp., on the other hand, have very narrow host ranges; a particular species or strain can only infect one crop. For example, an isolate of verticillium wilt from potato can infect a maple tree. By contrast, the Fusarium spp. that infects tomato cannot infect basil and vice versa. Therefore, it can be very helpful to know for sure which pathogen is affecting your crop so that you can plan an appropriate crop rotation.

Both fusarium and verticillium wilt pathogens can survive in the soil for many years after being introduced. Verticillium spp. produce microsclerotia—masses of compact hyphal cells that are highly resistant to desiccation and UV light. In the presence of susceptible hosts, microsclerotia will germinate and infect. Disease development is favored by moist soils and temperatures between 70 and 81°F. Verticillium species survive in the soil and on infested crop residues as microsclerotia or resistant mycelium and in symptomless weed hosts. Infection generally occurs through wounds in the roots caused by cultivation, secondary root formation, or plant parasitic nematode feeding. Both species are capable of long term survival in the soil. The disease is favored by cool weather and neutral to alkaline soils.

There is no effective chemical treatments for Verticillium Wilt, short of soil sterilization by steam, broad spectrum fumigants, or soil solarization.