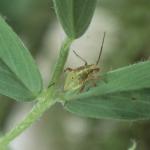 There are several species of tarnished plant bugs (TPB) in the US, but the most common in central and eastern US is Lygus lineolaris. Adults are about 6 mm long (1/4 inch), brown or tan or greenish with darker markings on their wings and back. Nymphs are bright green and progress through 5 molts (instars) from first hatch to the adult stage. The nymphs can be mistaken for aphids, but move much faster when disturbed.

Adults and nymphs have piercing sucking mouthparts (stylets) which are used to penetrate plant tissues and suck up cellular contents. TPB select succulent, nutritious tissues such as new growth or newly forming fruits (just after blossoming). While feeding, the bugs secrete a toxic substance from their salivary glands, which kills cells surrounding the feeding site. Usually the first signs of damage are small brown spots on young leaves. As the tissue grows, healthy tissue expands while dead tissue does not, which results in holes and distorted, malformed leaves, buds or fruit. Terminal shoots and flowers may be killed.

Overwintered adults lay eggs in spring, depositing eggs in stems and leaf ribs in host plants. These adults and nymphs attack strawberry flowers in May. A new generation of adults (which is what we are seeing now) will produce another brood in the late summer, for a total of 2 or possibly 3 generations per year.

Over half of the cultivated crops in the US are listed as hosts. In strawberry, this distorted growth of fruits is known as cat-facing. While both adults and immatures (nymphs) can be present during strawberry bloom, nymphs cause more damage since they are present in larger numbers. Raspberry fruit is deformed and becomes crumbly and unmarketable after TPB feeding. In apples, adults feed on fruit buds and cause fruit dimpling and scabbing, or dropping off (abscission) of the buds. For these fruits, TPB is a key pest. Vegetables usually sustain minor damage, but in some years damage can be significant. In lettuce, leaf stems and ribs are injured, causing localized discolored scars and scabs In celery, feeding on tender stalks produced large, brown colored wilted spots and blacking of joints, know as “black-joint’. In beans, feeding on flowers causes them to drop, and feeding on seeds in young pods causes pitting and blemishing of pods.  In tomatoes, eggplants and peppers, feeding may occur on flowers and stems, causing flower drop. Fruits may also be attacked leading to indentations, bumps, or yellowing of the flesh where the fruit is “stung” by the piercing mouthparts of nymphs or adults.  These could be confused with stink bug damage, but they do not have the white pithy areas beneath the skin that is typical of stink bug damage. It is not common to see this damage, but if the damage occurs it may help to determine the cause.  In pepper and in basil, feeding in emerging leaves causes distortion and browning of leaves.

We also find TPB damage in water spinach, which is grown as a succulent green for Asian markets (Note: this crop is on the US Noxious Weed list because it is invasive in tropical areas. It may be grown legally in Massachusetts ONLY with the proper permit. Contact Frank Mangan 978-422-6374 for more information).  TPB feeding occurs in the tiny new leaves in internodes. Holes are punctured in the folded tiny leaves and cells are killed, and as these leaves open up this results in symmetrical holes and distortion of the leaves. Brown scars occur in the internodes. Plants develop more branches in response to dead terminals, which makes them less marketable. Markets want long, single stems with as little branching as possible.

Economic thresholds have been determined for some crops where TPB is a key pest, but not for most vegetable crops. Furthermore, it is difficult to observe TPB directly on plants because they are very mobile and like to hide. White sticky traps placed above the canopy are used in strawberry and can be used in vegetables to indicate when adults are present. These traps are used as an indication of when plant bugs become active in the spring and a relative indication of their abundance, but are not used to determine when to control this insect.

In strawberry, thresholds have been developed and are based on numbers of immatures (nymphs). Nymphs are sampled by shaking flower trusses over a flat white surface. Thirty flower clusters should be sampled evenly from across the field (typically 6 clusters at 5 locations or 5 clusters at 6 locations).

If 4 or more flower clusters are infested with nymphs (regardless of how many) a spray is recommended. A follow-up spray application may be made after bloom if TPB are still present in high numbers (check harvest interval before selecting material). A sequential sampling system can be used to save time. See https://ag.umass.edu/fact-sheets/strawberry-tarnished-plant-bug.

If damage is unacceptably high, use insecticide applications. Labeled products for TPB on lettuce are listed in the New England Vegetable Management Guide and include several synthetic pyrethroids and carbamates.  Pyganic may be used by organic growers. Insecticide labels often list “lygus bug” instead of specifically “tarnished plant bug”. DO NOT SPRAY INSECTICIDES DURING BLOOM.

There are natural enemies of TPB, including a parasitic wasp, which was released for control of TPB in alfalfa (Peristenus digoneutis).  This was released in New Jersey and has spread throughout the Northeast, and can cause up to 50% mortality. However, it currently does not reduce the numbers sufficiently to prevent damage in key crops. Common predators, such as ladybeetles, spined soldier bugs and insidious flower bugs also prey on nymphs.

Where trade names or commercial products are used, no company or product endorsement is implied or intended.  Always read the label before using any pesticide.  The label is the legal document for product use.  Disregard any information in this newsletter if it is in conflict with the label.