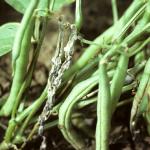 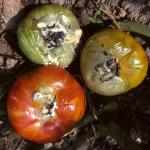 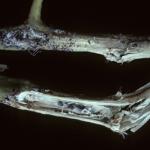 White mold is caused by the fungus Sclerotinia sclerotiorum. S. sclerotiorum has a very wide host range, attacking more than 300 plant species. It is an economically important disease on bean, cabbage, potato, tomato, and sunflower. It becomes a problem when cool and wet weather occurs during crop development, and can result in complete crop loss.

Symptoms of Sclerotinia sclerotiorum reflect its common name, white mold, and consist of prominent white, cottony mycelium covering affected plant parts. Survival structures, known as sclerotia, which are about the size of mustard seeds, black in color, and resemble mouse droppings, develop on diseased tissue and within killed stems. Infected stems have a bleached, light gray, desiccated appearance. Initial lesions are small, circular, water-soaked, and light green but rapidly increase in size. Affected tissues dry, turn brown, and may be covered with a white, cottony mycelium. Sclerotia form in infected tissue. Entire branches or plants may be killed.

In addition to the above symptoms, the following symptoms may develop for specific crops:

Tomato: Infected fruit rapidly disintegrates with a watery rot and a ring of sclerotia develops around the calyx.

Bean: The epidermis of infected fruit or stems will slough off easily if rubbed.

Potato: Tubers near the soil surface may become infected, but this disease stage is rarely seen. Tuber lesions begin as small, depressed areas near eyes, but enlarge over time. Tuber flesh shrinks and turn black on the surface, and beneath, a watery soft rot develops.

Cabbage: Symptoms on cabbage are described as watery soft rot or cabbage drop. The primary infection occurs at or near the soil line, causing a cortical rot of the stem base. The infection spreads upward, killing leaves in succession and causing them to “drop”, or collapse. The infection can also spread downward, infecting the roots. Eventually, the infection reaches the head, reducing it to a slimy mass - this is called soft rot. Sclerotia form between collapsed leaves, especially on the undersides of outer leaves. Under dry conditions, a brown canker may form at the stem base, which can kill the plant without causing soft rot. Symptoms may not be present in the field but can develop and spread in storage, even at 0°C.

Sclerotinia sclerotiorum overwinters in the soil as resting structures called sclerotia (small, dense masses of mycelia, surrounded by a protective black rind) that can persist there for 5-8 years. Sclerotia must go through a moist, cold (4°C/40°F) period to be primed for germination. Then, under cool (11-15°C/52-59°F), moist conditions, sclerotia in the top 2-4 inches of soil germinate to produce fruiting bodies called apothecia, which eject ascospores that are then dispersed by wind throughout a field. Ascospores are generally released when crop canopies close, creating a cool, moist microclimate. Ascospores require a nutrient source in order to initiate infection; in fruiting crops, this source is usually the senescing tissue of a flower or leaf. From there, the fungus can invade healthy stem or fruit tissue; infected tissues become soft and eventually die. Disease development occurs most rapidly at 20-25°C/68-77°F, especially in the presence of moisture. New sclerotia form on and within invaded tissues and are incorporated into the soil when crops are tilled under.

In vegetative crops, the primary source of infection is direct contact with sclerotia in the top 2-4 inches of soil. Ascospores can also invade plants through senescing leaves or abscised petals from nearby flowering weeds.

In general, white mold is a monocyclic disease - it infects crops during only one period in the spring and then will not infect more plants until the following year. Under conditions favorable for sclerotia germination, presumably all sclerotia in the top 2-4 inches of soil will germinate. New sclerotia formed during the growing year in infected crops will not be able to germinate that year because cool, moist environmental conditions will likely not occur until the following spring. However, if crops are cultivated to control weeds, sclerotia buried below 4 inches in the soil may be brought to the surface and could germinate and cause infection if favorable conditions ensue.

The fungus Coniothryium minitans parasitizes sclerotia of S. sclerotiorum and can thus reduce field populations. It is available commercially as the product Contans. Contans must be incorporated into the soil and is best applied 3-4 months before crop planting or in the fall.

For fruiting crops, fungicides can be effective if applied during flowering, however this can be difficult to achieve in crops that flower over a long period.

Preventative soil fumigant applications can reduce the number of viable sclerotia in the soil, but the effectiveness of this strategy is reduced in plasticulture systems due to untreated soil between beds.

In potato, preventative fungicide applications that target apothecia before ascospores are released can be effective.