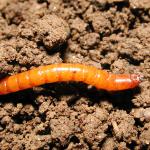 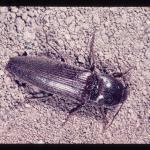 Wireworm causes damage to vegetable crops including cabbage, corn, lettuce, pepper, potato and sweet potato, as well as field crops including field corn, sorghum, soybean, tobacco, and wheat. Wireworms are attracted to CO2 released by germinating seeds, and can be a pest in large-seeded crops such as beans, peas and corn. Wireworms are the underground larval stage of click beetles, which are elongated, brown beetles that snap their bodies to make a clicking sound.

The wireworm is slender, jointed, usually hard-shelled, with three pairs of legs, and tan brown in color. This is the immature stage of the click beetle, which deposit eggs on soil during May and June. Grasses, sod and sorghum-sudangrass are favorite egg-laying sites. Eggs hatch to become wireworms that feed below-ground on seeds, roots, tubers and other plant tissue. Wireworms feed for several years before pupating and emerging as adults. Thus, a wireworm problem in the spring probably means there was an attractive grass crop present sometime in the past 3-5 years. Wireworms also prefer wet soils and moderate temperatures; they migrate up to reach warmer soils, but down to avoid excessive cold, heat, or drought.

Corn wireworm is reported to be the most common wireworm species in the Northeast, but others may also be present including the tobacco wireworm, (Conodoerus verspertinus). Wireworm adults emerge from the soil in May and June, hiding during the day and flying at night. Each female can lay 200-400 eggs on the soil surface down to a depth of 6 inches, preferring grassy or weedy fields. Larvae hatch within 3-7 weeks and then spend 2-5 years in the soil before becoming adults. They feed on other insects, roots, seeds, tubers, and other plant tissue.

Due to their long and variable lifecycles, infested fields will likely contain wireworms at all stages of their life, and the larvae begin feeding at 1-2 years old. Wireworm problems occur most often in fields that were forested, in hay, pasture or sod, had grassy weeds, were in grain production, or were planted with high residue grass cover crops (eg. sorghum-sudangrass or winter rye) within the past 3 years. Larvae feed on roots of many crops, where they can cause damage to growing seedlings or kill plants outright. Crops with starchy underground structures like potatoes can be rendered unmarketable due to tunneling caused by wireworms.

Unfortunately, practices that enhance organic matter in the soil may actually worsen wireworm problems. For example, one field where wireworm caused significant damage to early peas had been rotated through two years of rye cover crop to build organic matter. Another instance occurred after a thick winter cover of vetch and rye.

Often growers use floating row cover over early crops in order to exclude insect pests, only to find that these seedling pests cause trouble right underneath the cover. This pest overwinters in soil, especially where there is a lush cover crop, and will seek out food and egg-laying sites as soon as they become active in spring. That includes your prized transplants!

A review of many insecticide trials over two decades indicated that organophosphate insecticides (Group 1B) applied as a pre-plant broadcast or in-furrow treatment gave better control than carbamates (Group 1A), and that the active ingredients fipronil (Group 2B) and bifrenthrin (Group 3A) were as effective as the organophosphates, but with less environmental impact and potential human safety concerns.

Biological insecticides are available for the control of wireworm. The product PFR-97, containing the active ingredient Isaria fumosorosea Apopka Strain 97 is a fungal biocontrol that penetrates the wireworm larva cuticle and is labeled for soil applications on all outdoor grown crops. The product Majestene, containing heat-killed Burkholderia bacteria, is a bionematicide with a 2(ee) label for control of wireworm in potato and sweet potato. Both of these biological materials are OMRI certified for use in organic production.