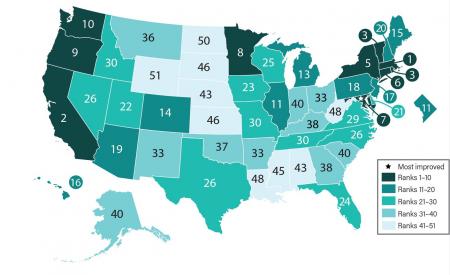 A rising number of states are showing US leadership on clean energy by adopting ambitious goals and energy-saving rules for buildings, appliances, and vehicles, according to the 2019 State Energy Efficiency Scorecard, released by the nonprofit American Council for an Energy-Efficient Economy (ACEEE). The 13th annual report identifies the leaders – Massachusetts and California; the most-improved states, notably Maryland; the states that lost ground such as Kentucky; and those lagging behind, including North Dakota and Wyoming.

The 50-state Scorecard reveals increasing state commitments to energy efficiency, the least-expensive clean energy resource, even in places where it had traditionally been overlooked.  Nevada, New Mexico, Washington, New York, and Maine passed 100% clean energy goals, along with plans to increase efficiency investment. A record number of states adopted new efficiency standards for a variety of products and equipment, some in direct response to the federal rollback of standards for light bulbs. States have also countered the federal plan to weaken vehicle efficiency by promoting electric vehicles and adopting California’s vehicle emissions standards, which now face a precarious future.

Please see below for links to the press release from ACEEE (which also includes a link to the full rankings and report) as well from as the Commonwealth.