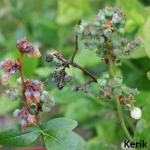 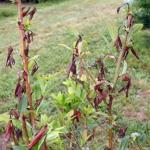 Blueberry shock virus (BlShV) is a member of the Bromoviridae family of plant viruses. It is seen primarily in the western United States, but an outbreak did occur in New York in 2011. Blueberry growers in New England should be familiar with the symptoms and epidemiology of this virus.

BlShV causes leaf blight and sudden death of flowering shoots. Symptoms occur within a year or 2 of infection and may include defoliation, blighted flowers, shoot dieback, and little to no fruit set. Symptoms may occur on the entire plant or on just a few branches. Affected tissues usually fall off of the plant, but occasionally dead shoots remain. Plants will initiate new shoots and appear to regain their health, but no fruit will be produced. An infected plant can recover completely in 2 to 4 years and produce fruit once again, but its pollen will carry the virus to uninfected plants. In regions such as the Northwest where BlShV is endemic, the preferred management method is to leave plants in the field and await their recovery; however, in regions such as New England where the virus is not yet established, it is best to remove and destroy infected plants immediately and to carefully monitor those that remain for symptoms. Researchers recommend that all plants in a field should be destroyed if >20% are infected.

BlShV is unusual among plant viruses in that it is present in pollen, and pollinators are the primary mode of dispersal. Infection occurs only when pollen bearing the virus comes in contact with flowers. It is not spread by aphids, thrips, or other common agricultural insect pests, nor is it spread by tools such as pruners. Exclusion is the most reliable way to control BlShV. Buy certified virus-free nursery stock. Blueberries are the only known natural host of this virus. All blueberry cultivars are believed to be susceptible to BlShV, although the rate at which the virus spreads through a field appears to differ among cultivars. Transmission of the virus from one cultivar to another is most likely when the cultivars flower simultaneously. Wild Vaccinium species are not likely to be a reservoir for the virus in the New England, so eradication of native blueberries is not recommended. BlShV can survive 1-2 weeks in bee pollen, so hives believed to hold infected pollen should not be moved to uninfected fields.

Symptoms may resemble those caused by common fungal diseases of blueberry, but may be distinguished by the production of secondary growth on affected branches. Symptoms may also be similar to those of Blueberry scorch virus (BlScV). It is important to distinguish between the two because BlScV is vectored by aphids and BlShV is not.

The UMass Extension Plant Diagnostic Laboratory can make a presumptive diagnosis of BlShV based on symptoms, case history, and absence of other pathogens, but this diagnosis would need to be confirmed by further laboratory testing. For more information on blueberry virus testing, contact Agdia, Inc. (www.agdia.com).