Prior to the turn of the 21st century, most U.S. states produced few to no grapevine, primarily because of limitation in cold hardiness and disease and pest resistance of the Vitis vinifera, the European grapevine species that comprises most commercial cultivars grown in the U.S. in traditional production regions.  The recent introduction of new, interspecific hybrid cultivars that incorporate more of the world natural diversity of grapevine species and thus, more climate resilience and disease and pest resistances, has allowed the development of grape industries in regions previously considered unsuitable.  The major V. vinifera cultivars grown worldwide were selected over decades or even centuries for best suitability in European regions and were then spread to California's and other arid western U.S. states.  Therefore, in comparison to V. vinifera, the evaluation of the new hybrids for non-traditional regions needs more time.  Moreover, in face of climate change, continued evaluation of V. vinifera and hybrid cultivars is critical to maintaining the grapevine industries in both traditional and non-traditional grapevine growing regions.  Economically, grapevine cultivars evaluation is one of the most significant components of grapevine industry: “Planting a poorly-adapted cultivar in the wrong place is a costly mistake.”  As new grapevine regions experience continued growth, the subsequent economic impact that comes with it is dependent on improving quality and quantity of grapes and wines produced. Continued discovery, development, and evaluation of grapevine cultivars is critical for maintaining sustainability and growth within the whole grapevine industry sector.  To respond to the need created by climate change and the growth of the grapevine industry in non-traditional regions, new cultivar selections are produced by breeding programs.  Testing of new cultivars is typically limited to a few areas.  Coordinated, multi-state testing is needed to evaluate adaptation in a variety of environments.  With changing climate and increased weather variability, cultivar adaptation, including physiological hardiness and robustness to changes in insect and disease pressure will be an increasing issue.  This project leverages substantial investments made in breeding programs and helps evaluate genotype x environment interactions. 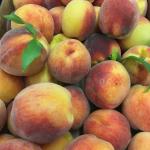 Over 75 named and numbered peach/nectarine and plum varieties/selections are under casual evaluation and demonstration at the UMass Cold Spring Orchard. Most of them are varieties/selection from the Fruit Acres/Stellar, Paul Friday/Flaming Fury, and Rutgers/Adams County Nursery breeding and variety introduction programs. Data/observations collected includes flowering, yield, fruit quality (size, color, firmness, brix, maturity, and taste/consumer acceptance), and pest susceptibility. Results/variety recommendations are available to growers at meetings and personal consultation/visits to UMass Orchard.

Read more »
Back to top