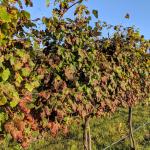 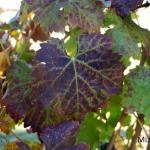 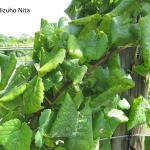 The Grapevine Leaf Roll Associated Virus complex (GLRaVs) consists of several distinct and genetically diverse viruses, all of which cause symptoms of grapevine leafroll disease (GLD). GLRaV-3 is the most prevalent virus associated with GLD worldwide. In a 2006-2007 survey conducted in the Finger Lakes region of New York, 68% of blocks tested were positive for at least one virus in this complex. Its presence has also been confirmed in New England vineyards.

All cultivars, hybrids, and rootstocks of Vitis vinifera are susceptible to GLD, although symptom expression varies widely among cultivars. In the northeastern US, symptoms typically appear in mid to late summer. Red cultivars develop deep red leaf pigmentation with green veins and leaf margins rolled under. The leaves of green cultivars are rolled and turn yellow, sometimes with a mottled pattern. These symptoms may be confused with those caused by potassium or phosphorus deficiency. Infected vines lack vigor and may be stunted. Fruit symptoms include delayed maturity, diminished yield, and decreased quality. Decreased winter hardiness may also be observed. Symptoms in infected scions may be suppressed when grafted onto vigorous rootstocks such as AXR-1. All other Vitis species are also susceptible to infection by GLRaVs, but infected vines are frequently asymptomatic.

Propagation from infected stock plants is a significant means by which GLRaVs are dispersed. They are also transmitted from plant to plant in a semi-persistent manner by several species of mealybug, including the grape mealybug (Pseudococcus maritimus). All life stages of mealybugs are capable of virus transmission, although the earliest nymphal stages appear to be much more efficient vectors than adults. Depending on species, mealybugs may remain infectious for as little as a few hours or as long as a few days. Several species of soft scale are also capable of transmitting the viruses, but this relationship is not well studied.

Once introduced into the phloem by insect feeding activity the viruses proliferate, impeding phloem function and the transfer of nutrients and sugars within the vine. The host range of GLRaVs was long thought to be limited to Vitis species, but recent research has demonstrated that it is also capable of infecting Nicotiana benthamiana.

Once infected, grape vines cannot be cured of GLD. Plant certified virus free vines; sources of certified plant material may be found at The National Clean Plant Network for Grapes (http://ncpngrapes.org/). Scout regularly for symptoms and remove and destroy infected vines. Be aware of the presence of mealybugs and scale and manage these pests appropriately. Mealybugs and scales can be present at low levels and may easily go unnoticed as they may cause very little damage. The grape mealybug does not colonize vine roots; however, some other mealybug species that vector GLRaVs do. In cases where these species are present, a fallow period of one year is recommended to allow time for any roots remaining from rogued plants to decay. Remove wild Vitis species from the area as much as is practical.

Resistant cultivars are not yet available.