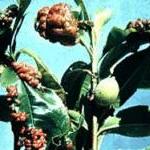 Probably the most irritating thing about seeing the characteristic warty red leaves of peach leaf curl is realizing that it's already too late to do anything about the disease. The second most irritating thing is realizing that a single fungicide treatment would, in all likelihood, have prevented the outbreak. And to really frustrate growers, the disease often fails to appear for years, even without fungicide treatments, only to suddenly appear in epidemic proportions during a particularly wet, cool spring.

The fungus that causes peach leaf curl (Taphrina deformans) survives as spores in microscopic crevices on the tree. Spores from old infections lodge in loose bud scales and other tiny fissures, waiting for the next spring. Then, spores that are washed into buds or onto the first new leaves will cause infections if leaves stay wet and temperatures are between 50º and 70º F. Wet, cool springs keep peach growth slow, so new buds and leaves remain susceptible for a long time, and heavy leaf-curl will develop in untreated peaches. A warm spring, even if it is wet, won't produce nearly as much disease.

Once the fungus is in the leaf tissue, fungicides won't effect it. Infected leaves characteristically have reddened warts or curling. Leaves may also appear yellow, orange or purple. Infections of the new twig tissue cause swelling. In rare instances, fruit may be infected, and develop raised, wart-like growths.

As the leaf infections age, they turn gray and appear powdery. The fungus produces spores, which break through the leaf surface, causing the powdery appearance. These spores don't cause new infections, but rest in protected areas on the peach tree until the next. Infected leaves generally drop in early summer.

Leaf curl is relatively easy to prevent, even though the timing of the treatment is a little inconvenient. A fungicide spray applied in the autumn after at least 90% leaf-fall, or in the spring just prior to bud-swell, will generally stop leaf curl. If an orchard has been heavily diseased, making both fungicide applications may be necessary to deal with the large amount of inoculum. The fungicide applications should not be concentrated to more than 2X, to insure that the coverage is thorough. Fungicides need to penetrate the microscopic crevices that are protecting the fungal spores.

The most effective fungicides are chlorothalonil (Bravo) or copper compounds (Kocide, COCS, etc.). Ziram, lime sulfur or Bordeaux are useful but somewhat less effective. Check the label for rates and other use recommendations.

For the growing season when a leaf curl epidemic hits, the only treatment is to minimize stress on the infected trees. After infected leaves drop, peaches will generally produce new leaves. This new growth stresses the tree. In severe cases canker infections develop more easily and trees may fail to develop adequate winter hardiness. Severe leaf curl can ruin one season's crop, and may set the stage for more long-term problems related to stress. Minimize the stress by supplying some extra fertilizer, particularly nitrogen, irrigating, and removing the fruit load.