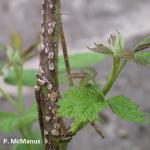 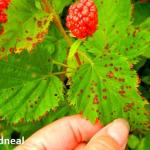 Raspberry anthracnose is caused by the fungus Elsinoe veneta. All species of Rubus are susceptible.

Symptoms on canes include stunting and loss of vigor. Lesions can occur on all parts of the plant but are most recognizable on canes. The lesions are round to oval, often sunken, and tan or gray in the center with a dark purple border. Lesions are usually small but may coalesce and affect large areas, a symptom known as “gray bark.” Affected bark becomes desiccated and often cracks. Infected canes are more prone to winter kill. The fruiting bodies of E. veneta form just below the cuticle or epidermis, and are not round and black like those of the fungi that cause cane and spur blights. Foliar lesions are small and yellowish at first, but as they enlarge they come to resemble cane lesions. The centers sometimes drop out to create a “shot-hole” appearance. Infected fruit will be hard and dry, and the stems of fruit clusters may be girdled by lesions.