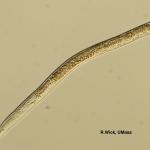 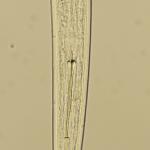 The lesion nematode (Pratylenchus species, most importantly P. penetrans) feeds on roots and contributes to plant decline. Lesion nematodes enter and destroy the cortex of feeder roots, creating the lesions that they are named for. These wounds interfere with proper root function and can serve as an ingress for soil-borne fungal pathogens. Above ground, raspberry plants may appear stunted, wilted, and yellowed. Plants often have reduced vigor, produce fewer canes, and are less resilient when stressed by factors such as winter injury, drought, and insect feeding. Decline caused by nematode infestation may occur gradually over a number of years.

Dagger nematodes (Xiphinema spp.) are most important in raspberries as vectors of viruses. Some species of dagger nematode also cause direct damage to raspberry by feeding on root tips; however, the most common species in the US, X. americanum, generally does not. Dagger nematodes vector tomato ringspot, tobacco ringspot, cherry leaf rasp, grapevine fanleaf, and peach rosette viruses. Strawberry latent ringspot virus is transmitted by X. diversicaudatum, which exists in northwestern North America but is more common in Europe. Cherry rasp leaf and strawberry latent ringspot viruses have not been reported on Rubus species in the US, but both have been detected in other host species. Needle (Longidorus spp.) nematodes are vectors of cherry rasp leaf and tomato black ringspot viruses. All of the above named viruses have a large host range that includes common weeds, and both dagger and needle nematodes can transfer viruses from one host species to another.

Due to the wide host range of these nematodes, crop rotation is of limited value. Pre-plant fumigation may be used in fields with a history of significant nematode populations. If lesion nematodes are a concern, plants in the field should be killed and plowed under first, as this forces the nematodes out of roots and into the soil where they are more vulnerable. Several organic products are available for nematode control; however, evidence of efficacy is often lacking. Biofumigation with selected Brassica species may be useful for reduction of nematode populations. Plants growing in fertile soils are able to withstand nematode infestation better than those grown in poor soils. Adding compost to the soil boosts plant nutrition and increases microbial competition and populations of natural enemies in the soil. Control weeds, as many species can harbor important viruses. Do not move infested soil to an uninfested area- clean tools, tractors, and boots before moving from one area to another.

The degree of nematode damage is influenced by several factors including temperature, rainfall, soil type, and host cultivar. As a rule of thumb, 100 individuals per 100 cm3 soil is considered the economic threshold for lesion nematodes in raspberry. There is no established threshold for dagger or lesion nematodes in raspberry, but the presence of these nematodes in a raspberry planting is a cause for concern because of the potential for virus transmission. Population levels may be assessed at any time of year, but the most accurate measurements are taken in the fall when nematode density is at its peak.