In a commercial orchard, virtually all of the spores that can start an apple scab epidemic come from within the orchard. Scab spores don’t travel very far, generally no more than 100 ft. Add to this the fact that early in the season, from green tip to tight cluster, only a very small proportion of the scab inoculum matures and is available to cause infection. This means the risk of scab infection early in the season can be greatly decreased by reducing or eliminating any old infections in apple leaves on the orchard floor.

Research in New England has shown that either flail chopping or urea applications will reduce apple scab inoculum. In addition, in very low inoculum orchards, it is possible to delay the first scab fungicide applications as late as pink, or until after three infection periods have occurred (whichever comes first). In this fact sheet, we present methods describing how to do both things: reduce the amount of scab inoculum in an apple block; and measure the inoculum in a block in order to decide whether the first scab fungicide may be delayed.

Regardless of the scab management program used in an orchard, we recommend reducing apple leaf litter and the scab inoculum it contains. It is a relatively inexpensive and reliable method that decreases the risk of apple scab.

Shredding leaves. Shredding all leaves on the orchard floor in November or April reduces the number of scab spores by about 85%. If the strip under trees cannot be reached with shredding equipment, then flail chopping the remaining area between trees will reduce scab spores by about 50%. Small leaf pieces break down quicker, and are more readily consumed by earthworms. If shredding is done in April, it will flip leaves, and leaf pieces, over. The scab fungus has already started to grow by the spring, and forms fruiting structures that will release spores up and into the air. Flail chopping flips probably about half the leaves or pieces over, and spores formed in those pieces of leaves cannot release into the air.

Urea treatments. Spraying the surface of the leaves on the ground with urea will reduce spores by about 66%. Use feed grade urea, which is 46% N, and mix a 5% solution in water. (This is 44 lb. per 100 gal.) Feed grade urea is more expensive but dissolves in water much easier than granular (fertilizer grade) urea. Thus, feed grade is recommended, though the cost is higher – app. $20/acre vs. half that price for granular urea. The nitrogen content of both is the same, so granular urea can be used, but with more effort. Spray the ground surface at a rate of 100 gal. per acre. You can use an air-blast sprayer with only the lower nozzle(s) turned on, but it’s best to use a boom-type herbicide or field crop-type sprayer. Make applications approximately two to four weeks before bud break, with a longer interval being more effective. Consider that this supplies app. 20 lbs. actual nitrogen per acre, so you will need to adjust your N fertilizer application rates later in the season.

Shredding and urea treatments can be combined, for even greater reductions.

An orchard with no scab on the orchard floor, and no sources of scab within 100 ft., has a very low risk of scab infections early in the season. Research out of the University of New Hampshire has demonstrated that in these low-inoculum blocks, the first scab fungicide does not need to be applied before pink, or until the first three infection periods have occurred, whichever comes first. This may save one or more fungicide applications in the block

This is a radical departure from the recommendation that fungicide applications should start as soon as green tissue appears on the apple tree. After all, it is early-season infections that have the best chance of exploding into significant scab problems. And with increasing resistance to the most effective eradicant fungicides, the sterol inhibitors, an epidemic that does get started will be more difficult to stop. We recommend that growers use the delay approach conservatively. Rather than delaying until pink, or until the first three infection periods, delay until tight cluster, or the first two infection periods.

There are several other important considerations if one chooses to delay the first fungicide.

Old blocks of standard trees are not recommended for this strategy. When using this strategy for the first time, it is best to try it in only one block, or in a small part of the orchard, preferably on small to moderately-tall trees on semi-dwarfing (or smaller) rootstock(s). The risk of missing infections in the tall, dense canopies of old standard or semi-dwarf trees is high, and estimating inoculum in them is difficult and subject to mistakes.

Sterol-inhibitors can be a problem. Use caution in any block where more than one sterol-inhibiting (SI or DMI) fungicide application was made during the previous growing season. SI fungicides allow scab to remain active in the leaf, even though there are no visible scab lesions. Again, this can make estimating inoculum unreliable.

Look outside the block. Make sure that there are no wild crabapples, abandoned trees or other source of scab within at least 100 ft. of the block. Even an adjacent block of apparently scab-free trees cannot be assumed to be scab-free. It has to be evaluated to be sure that it is. This brings up a very important point.

Do not delay without doing a fall PAD assessment. It is not safe to assume that there were no infections in an orchard based on casual observations during harvest or late sprays. Even packout evaluations of scab do not accurately estimate the scab present in a block. The only accurate way to measure scab inoculum in a block is to measure the potential ascospore dose, or PAD.

A PAD assessment can be done using a sequential sampling procedure as presented here. With this procedure, an orchard’s level of “scab-risk” can be predicted after examining potentially as few as 100 shoots on 10 trees. It normally takes no longer than 45 minutes. 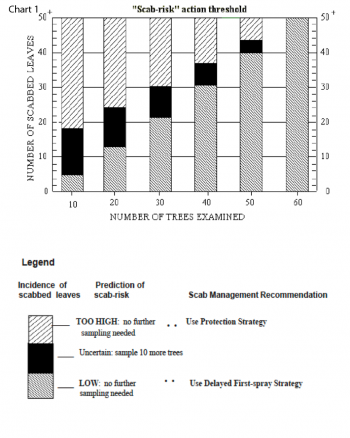 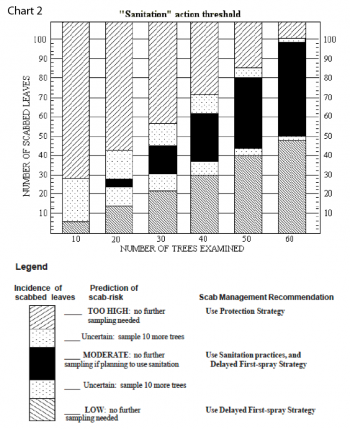 STEP 1: Assess the orchard for leaf scab after harvest but before leaf-fall:

Start PAD counts in one corner or along a border row and pick a tree at random. The number of shoots that should be sampled on a single tree varies with tree size. For example, if trees are approximately 9-12 ft. tall, examine 10 shoots per tree, and record the number of leaves with scab on each shoot. Look on upper and lower leaf surfaces, and look at shoots on all sections of the trees so that you get a good representation of what’s there: inner, outer, upper, lower, and from all four quadrants of the canopy. Then move on to the next tree. To decide which tree is “the next tree”, estimate how many trees are in the block, and divide by 10, because a total of 10 trees need to be evaluated. If there are about 400 trees in the block, choose a direction, and walk along counting trees until the fortieth is reached. Examine 10 shoots in that tree for scab. Continue on until 10 trees have been evaluated. Try to select trees in a pattern that covers the block, and make sure that at least one or two trees in the highest risk areas, such as corners near woods or low areas, are sampled. Try to sample about as many trees in the interior of the block as in the three border rows on the edges of the block.

Next, total the number of scabbed leaves on the 100 shoots, and decide if further sampling is needed to predict the ‘scab-risk” of the block of apples. To do this, special charts have been developed. These are presented below. Basically, if scab levels are either very low or very high, no further sampling is needed. But, if scab levels are in a mid-range, then more samples need to be taken to improve the accuracy of the count. This is called sequential sampling, and it saves sampling time by limiting counts in areas where scab is obviously low enough to allow a delay the next year, or high enough that no delay will be possible. Only those blocks where that decision isn’t clear need to be sampled further.

Here are some examples. Grower Jones had 1 scabbed leaf on the 100 shoots of the 10 trees that we sampled in his block. He had decided that he would use a urea spray in the block, so he checked the chart for “Sanitation Action Threshold”. One was “low” and no further sampling was needed. Jones would be able to delay his first fungicide application next year. It took about 20-25 minutes to assess.

Garcia counted leaves on 10 trees, and found 12 that had scab. He was not planning to use any sanitation method in the block, so he checked the “Scab-risk action threshold” chart. That said that he needed to sample more, because it was not possible to determine whether risk was low or high. Garcia sampled an additional 10 trees, and found 16 more scabby leaves. He added the first 12 scabby leaves he had found earlier to these 16, for a total of 28 scabby leaves. He then checked the column for 20 trees examined. This told him that the block had a high level of scab, and that he should not use a delay. It took him about 40 min. to do the whole job.

Garcia then wondered what might happen if he did chop his leaves or use urea. So he checked the “Sanitation” chart. That indicated that his scab level was moderate, and that if he did use sanitation, he could delay his first scab spray. So Garcia chopped leaves in the fall, applied urea the next spring, and delayed his first scab spray to tight cluster.