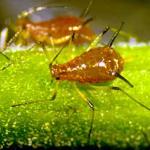 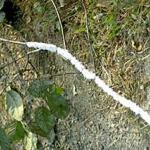 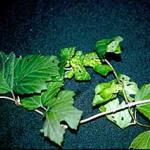 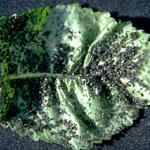 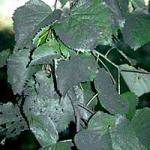 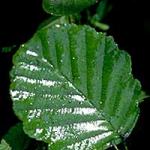 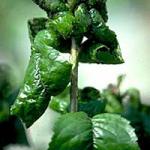 There are many species of aphids and all are a bit different in appearance, biology and the host plants attacked. Therefore, they will be discussed here in the general sense. Aphids are soft and plump bodied, have long spindly legs, are often wingless and posses cornicles, which immediately distinguish them from other insects. Aphids have a piercing-sucking mouth-type that is adapted to feeding on plant sap. Their guts are long, coiled tubes and as the plant sap passes through this digestive tract, plant sugars (among other compounds) are concentrated out into their blood. The remainder of the sap in the gut is finally expelled as a clear liquid that still contains many plant sugars; this waste is known as honeydew.

Honeydew appears as clear drops of liquid on foliage, as well as whatever is under a plant housing aphids, and acts as a food source for a group of fungi known as sooty molds. These molds colonize the honeydew and become very black, hence the name. Heavy populations of sooty mold can make a plant quite unattractive and even interfere with the process of photosynthesis. Primarily, however, sooty mold is an aesthetic problem. Occasionally, ants can be seen on foliage tending to the aphids and collecting their honeydew for its sugar content. These ants may also help defend the aphids against such natural predators such as ladybug immatures and syrphid fly larvae. Some aphids are categorized as woolly aphids and these produce waxy strands over their bodies. One common member of this group is the woolly beech aphid which is primarily found on European varieties of beech (Fagus ). These are active in the spring only and produce large amounts of honeydew that may create aesthetic problems.

Aphid feeding does not cause the typical yellow stippling injury to the host plant that is so common for most other piercing-sucking insects. Although, they may cause leaf distortion if new, emerging foliage is fed upon.

Many aphid species have a primary host plant that usually involves a deciduous tree species (at the beginning and end of the season) and very many secondary host species during the summer. A generalized life cycle for an aphid species with both a primary and secondary hosts is as follows:

Aphids can cause curling of the foliage, as with the Snowball Aphid on certain viburnums, and much honeydew that can lead to unacceptable levels of sooty mold. To deal with sooty mold, one must manage the aphids. Several common groups of predators occur naturally and visual monitoring should be performed to determine their presence and numbers prior to administering any chemical controls that may be extremely detrimental to their population numbers. These natural controls include: ladybugs, lacewing larvae, wasp parasites, and syrphid fly larvae, among others.