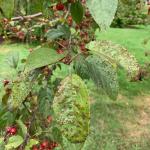 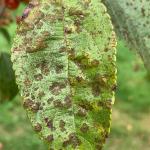 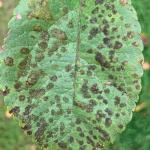 The fungal pathogen Venturia inaequalis is responsible for apple scab.

Apple scab affects nearly all species and cultivars of apple and crabapple (Malus), aside from those that have been bred for resistance to the disease. Additional hosts in the region include pear (Pyrus), mountain-ash (Sorbus) and Cotoneaster.

Leaves, flowers, fruit and succulent twigs are susceptible to infection from V. inequalis. However, on landscape trees (especially crabapples), foliar blight is the most important outcome of the disease. While the lesions that develop on fruits are mostly superficial, they severely degrade the value of apples and consequently apple scab is a major concern for commercial growers. Blighted foliage becomes chlorotic (yellow) to brown and is prematurely shed from the canopy. During years with wet spring weather, significant volumes of foliage can be shed from the canopy early in the growing season. For cultivars that are highly susceptible, defoliation can occur, but this often happens late in the growing season and has only minor effects on the overall health of the tree. More often, wet spring weather also means good growing conditions for the tree and new growth continues well into the summer, compensating for the loss of older leaves produced in the spring.

The fungus survives the dormant season in the infected leaves and twigs. From late winter to early spring, black fruiting structures develop in leaves, which mature to release spores during wet periods as trees are flushing new growth. Symptoms first appear on young foliage as olive-green spots and blotches that have poorly defined margins. These expand and coalesce over time. Several weeks post-infection, the fungus produces a large mass of asexual spores that continuously reinfect the leaf, resulting in a foliar blight. The ability of V. inequalis to continuously reinfect the host over the course of the growing season by producing asexual spores, whenever environmental conditions allow, is described as a polycyclic life cycle. Brown lesions on the fruit lead to rot and shedding as other organisms invade.

Breeding efforts have resulted in numerous disease-resistant cultivars of crabapple that are excellent choices for planting in the landscape (e.g. 'Don Wyman', 'Prairifire' and 'Snow Drift'). For established trees, collect and discard foliage that is shed throughout the growing season to reduce inoculum at the site. When foliage is left under infected trees, spores produced by the fungus the following spring are in close proximity to newly developing foliage, readily perpetuating the next annual cycle of infection. Pruning and removal of branches and shoots on interior, shaded portions of the canopy can improve air flow and light, which are inhibitory to disease development and spread. Regular sanitation pruning of suckers and interior canopy shoots on apple and crabapple is necessary to help control apple scab but also to improve the aesthetics of landscape trees. Chemical management is not warranted for this disease in most landscape settings, even when trees are defoliated late in the growing season. Numerous fungicides are labeled for use against apple scab and include: captan, mancozeb, copper-based products (e.g. copper hydroxide), myclobutanil and tebuconazole. Many fungicides labeled for apple scab are not intended for use on fruit that will be consumed. Therefore, if chemical management is desired on a fruit tree, careful selection of an appropriate fungicide is required. Minimizing additional stresses can improve overall tree vigor, limiting the impact of apple scab on tree health. For example, establishment and maintenance of mulch rings around landscape trees will avoid mowing and string trimmer injuries and pruning of dead stems and branches will limit colonization by opportunistic pests and pathogens. For young and recently transplanted trees, regular watering during the summer will help to reduce the effects of transplant shock.