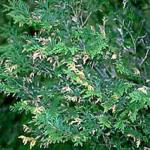 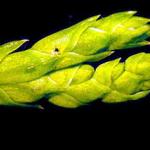 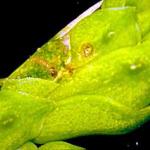 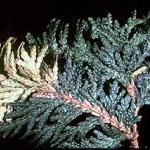 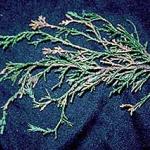 The adult moths are small (wingspan 5-6mm), silvery tan in appearance, and are active starting approximately mid-June into early July. Eggs are laid on the foliage, from which the larvae soon hatch, and then they chew their way into the leaves. These entrance holes are only noticeable under magnification. Larvae will feed within the foliage until autumn, whereupon they will over-winter within these mines. Feeding will resume in the spring and pupation will begin by late May. This species pupates within the mine (a western species, A. cupressella), which is also sometimes found in the East, exits the foliage and spins a white cocoon on the foliage within which they pupate). Browning of the foliage from all arborvitae leafminer species feeding activity will not appear until late January or February and is therefore often misdiagnosed as being winter injury. Browned foliage tips that are hollow, contain frass (the dried, brown pellets of the caterpillar's excrement), and perhaps a living larva are the key telltale signs of leafminer presence. On the other hand, if the brown tips are not hollow, then the cause is due to winter injury, disease or some other factor.

As with most pests that feed within their hosts, achieving desired levels of management can be difficult. One strategy is to control the adults prior to egg-laying. Adult arborvitae leafminers (Argyresthia thuiella) appear starting around mid-June into July or 533-700 growing degree days. Chemical cover sprays can be applied at this time. The use of yellow sticky cards for monitoring adult flight is not effective for this leafmining pest and visual observations are necessary. During the known flight period, gently shake the foliage, if adults are present they can then be observed in this forced flight. Once the larvae are in the foliage, systemic pesticides may be necessary. These may be applied either by soil or trunk injection. Many natural controls exist for this pest in the form of parasites. After 2-3 years of building leafminer populations, these parasites may reach levels high enough to severely reduce the numbers of this pest. However, even though arborvitae can withstand heavy defoliation from this pest and still live, the aesthetic value of the planting may be greatly reduced to unacceptable levels.

Other species of Argyresthia do exist and may also be present. Their biology and injury are similar to that of A. thuiella. According to Johnson and Lyon's "Insects That Feed On Trees And Shrubs", the species A. freyella Walsingham, attacks eastern redcedar (Juniperus virginiana) as well as arborvitae (Thuja).