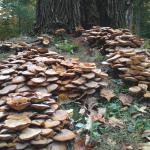 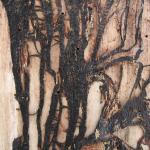 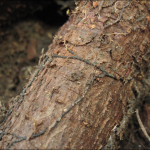 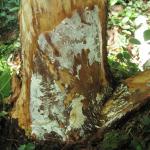 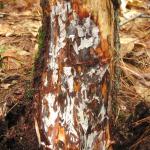 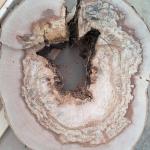 Armillaria root and butt rot in New England is caused by a complex of six Armillaria species: A. calvescens, A. gallica, A. gemina, A. mellea, A. ostoyae, and A. sinapina. This fungus is one of the common wood-rotting pathogens on forest and landscape trees. Armillaria is generally more aggressive on trees that are stressed by insect infestation, drought, ice/wind storms, or mechanical injury. After severe insect defoliation in consecutive years, widespread mortality can occur due to infections from Armillaria.

Nearly all woody plants and even some non-woody plants are susceptible to infection from Armillaria. Certain Armillaria species more frequently attack conifers (e.g. A. ostoyae) while others prefer hardwoods (e.g. A. gallica and A. mellea). However, each species is capable of infecting both hardwoods and conifers. The vigor and age of the host tree or shrub can significantly influence their ability to resist infection. Young trees weakened by abiotic stresses, for example, are highly susceptible to infection and death. In addition, young trees planted close to stumps of large trees serving as an inoculum source for Armillaria are vulnerable to infection.

The aboveground symptoms of Armillaria root and butt rot on infected trees are mostly general in nature and are often not specific enough to allow for accurate diagnosis by themselves. These symptoms include: progressive canopy dieback, stunted shoots, undersized leaves/needles, pale-colored to chlorotic foliage, premature fall color change, excessive tapering and sap/resin flow at the base of the tree, and the sudden browning of leaves/needles in middle to late summer. When cavities are present at the base of the tree, the presence of Armillaria is easier to detect. Young trees are often killed relatively soon after initial infection due to insufficient natural defenses. Well-established trees may be infected by Armillaria for decades without showing major symptoms of infection until they are weakened by insect defoliation, drought, competition for light and soil minerals, or attack from other insect pests and diseases.

Armillaria produces annual fruiting structures (mushrooms) in late summer and fall at the base of infected trees. They may appear from late August through October but in southern New England are most abundantly found in late September and early October. These gilled mushrooms grow in dense clusters, are golden tan in color and often have a conspicuous white ring on the stem. White-colored spores are locally wind-dispersed and are capable of initiating new infection centers when they establish. Mushroom production can be sporadic and is often not a reliable indicator of infection since they may not be produced if dry weather persists in late summer and fall or until the tree is dead. The primary modes of disease spread are through rhizomorphs and root grafts (root to root contacts) between diseased and healthy trees. Rhizomorphs are root-like filaments of fungal tissue (mycelia) that are encased in a black, melanized rind. Rhizomorphs are produced from infected trees and grow through the soil until they come into contact with nearby roots or the lower trunk of a healthy tree. The rhizomorphs then attach and through chemical and physical means, invade the root or lower trunk and begin to attack cambial tissues that are rich in sugars. When Armillaria invades through root grafts, mycelia grow from the infected root towards the lower trunk, where the fungus ultimately girdles the tree. Removal of the bark on declining and recently killed trees can sometimes reveal the bright white-colored mycelial mats, known as “mycelial fans”. In other cases, especially with deciduous hardwoods like sugar maple and oak, the fungus may grow up through the center of the lower trunk, attacking the heartwood while leaving the outer sapwood and bark tissue unaffected. This leads to the development of “butt rot”, where the tree appears healthy but becomes structurally unsound as the heartwood is decaying. Over time, the fungus advances into live sapwood and bark tissue, leading to the development of decline symptoms outlined above. Once the tree dies, Armillaria lives as a saprophyte, decomposing the infected wood tissue.

Complete control of Armillaria is often difficult to impossible, due in part to how common the pathogen is in forest, suburban and urban settings. The ability of Armillaria to produce rhizomorphs, allowing it to spread undetected through the soil in search of a new host, is a major advantage over other wood-rotting fungi. Most wood-decaying pathogens must rely on wind-dispersed spores to initiate new infection centers when root grafts are not present. Additionally, Armillaria is able to persist for many years as a saprophyte on stumps and large lateral roots, therefore stump grinding and removal of large lateral roots is recommended, if possible. Because Armillaria grows very slowly and infected trees may persist for many years to decades with infections, maintaining high vigor is the best course of action when the fungus is known to be present. Many healthy trees frequently resist attack from Armillaria and only succumb to infection and death when they are weakened by other stresses. Avoid drought stress by irrigating infected trees on regular intervals during extended dry periods. Fertilization can also improve host vigor but care should be taken since Armillaria can also utilize these nutrients and may benefit more than the tree. For sugar maples, liming has shown to improve vigor and can help resist attack from Armillaria. Maintaining optimal soil pH, avoiding needless mechanical wounding and limiting stresses that weaken a tree’s natural defenses will all help to assist the tree is naturally defending itself against Armillaria. Protect infected trees from defoliating insects as this is one of the primary stresses that facilitate disease development.