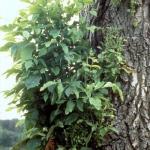 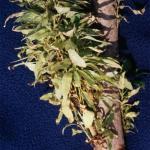 Highly susceptible trees die in 1-3 years, while tolerant trees remain alive for many years.  Less susceptible ash often develop stunted growth with the development of shoot elongation and increase in stem girth at about half their normal rates.  In addition, the shorter distance between internodes results in tufted foliage, which is often chlorotic and smaller than normal.  Eventually scattered branch dieback occurs throughout the crown, and it usually progresses to the point where the entire crown is affected.  The dieback actually occurs during the winter.  Specifically, branches that were healthy the year before fail to leaf out the following spring.

Witches brooms occasionally form at the root flare or on the lower portion of the trunk, but ash yellows infected trees may die without developing this symptom.  Nevertheless, they are a key field diagnostic symptom when seen growing out of a declining ash tree.

There is no way to prevent or cure ash yellows phytoplasma infections.  Remove infected trees with severe dieback.  Avoid planting ash trees in areas with active ash yellows.  Grow trees best suited to soil, rainfall, drainage, and other vital conditions at the site.  For established ash trees, provide irrigation during extended dry periods, fertilize as needed, prune to sustain a sound branching structure, and maintain 2-3 inches of composted mulch over as much of the root zone as possible.  In the future, rootstocks and ash cultivars that are tolerant of ash yellows may be available.