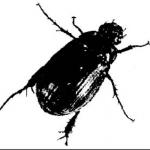 A native of Japan and China, where it is not an important pest, the Asiatic garden beetle (AGB), Autocerica castanea, has been known in the Northeast since the 1920s. In Massachusetts, the AGB is commonly seen in the Connecticut River Valley and throughout southeastern Massachusetts; particularly on Cape Cod.

The Asiatic garden beetle has four life stages: egg, larva, pupa, and adult. Its life history is similar to the Japanese beetle and the rose chafer, with one generation per year.

The eggs are laid in the soil in clusters of up to 20, held together by a gelatinous material. The larva, or grub, is a typical C-shaped scarab grub. The larva is white with a brown head capsule and six legs, and has a V-shaped anal opening with a single transverse row of curved spines on the underside of the last segment. Mature grubs are about 3/4 inch long. The larva pupates in an earthen cell, emerging as an adult beetle in about 8-15 days. The adult is a small chestnut-brown, velvety, sometimes almost iridescent, scarab beetle. The wing covers (elytra) do not entirely cover the abdomen.

The larvae pupate in late June, with adults most abundant in July and August. Adults may be present until October. The adults are highly attracted to light and may be very numerous at windows, doors, or wherever there is a bright light. Since adult beetles are nocturnal, they are seldom seen on host plants where damage occurs. At dusk, beetles leave the ground, where they have been hiding during the day. During warm evenings, they are very active and fly in search of host plants. The females burrow into the soil to lay their eggs, which hatch in about two weeks and then the larvae begin feeding.

The Asiatic Garden Beetle attacks more than 100 plants, feeding on both foliage and blossoms. Adult beetles begin feeding at the margins of leaves. When feeding is heavy, only the midrib may remain. Favored hosts include butterfly bush, rose, dahlia, aster and chrysanthemum. The insect can be extremely destructive, completely destroying both foliage and flowers.

The larvae are seldom uniformly distributed over any large area. They show a preference for grass areas, but may be found in flower and vegetable gardens. Moist, loamy to sandy loam soils are preferred. The larvae apparently feed scattered at different depths and do not as severely prune the roots off close to the surface as Japanese beetles do. The larvae feed upon the roots of practically all plants. Larval populations of up to 100 per square foot have been recorded under favorite hosts, such as orange hawkweed (Hieracium).

Many fruit, vegetable, perennial and annual flowering plants, trees and shrubs as well as weeds and grasses.

In lawns and other turf areas, the Asiatic Garden Beetle may be controlled as with other white grubs. Several insecticides are labeled for control on woody ornamentals. Read and follow all label directions carefully.