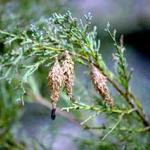 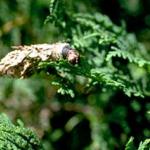 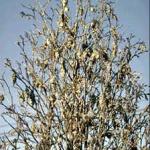 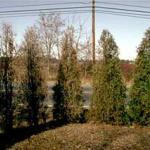 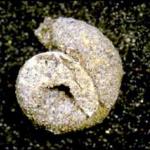 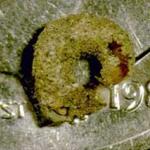 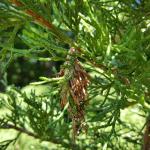 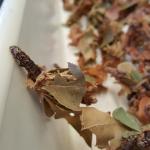 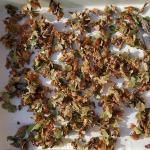 In the northeastern United States, Thuja (arborvitae) and Juniperus (juniper) are two common host genera. Often times, this insect is referred to as the evergreen bagworm. However, it is important to note that over 120 species of trees and shrubs (both deciduous and evergreen) have been documented as hosts for this insect. Additional hosts include but are not limited to cedar, pine, sycamore, maple, locust, boxelder, and linden.

The larvae of this moth species form "bags" or cases made from plant foliage and silk. These may appear to be normal plant parts to the untrained eye. Larvae will carry these cases while they defoliate the host plant. After the larva hatches from its egg, it is capable of dispersing to surrounding plants using the ballooning technique, similar to that of gypsy moth caterpillars. Tiny bagworm caterpillars will spin a silken thread and disperse with the assistance of the wind. If the bagworm caterpillar lands on a suitable host, it spins a tiny cocoon-like bag to which it attaches pieces of plant leaves, needles, and twigs. Only the head and thorax of the caterpillar comes out of the bag, which is dragged along behind the insect as it moves. Seven instars have been reported for the caterpillars.

Mature bagworm larvae will attach their bag to a branch with a strong silk band. Pupation occurs within the bag. Adult bagworms are fascinating. Adult females spend their entire lives inside their bags and are wingless and do not look like a typical adult moth. Adult males have wings and emerge from their bags as freely flying moths that are hairy and dark in color with membranous wings. Males reportedly live 1-2 days and adult females may live for a couple of weeks.

Injury to hosts can be quite severe when populations are high. Complete defoliation and plant death can result from the feeding activity of this pest. Given that the female does not fly, injury usually appears severe on one plant and then often radiates down a hedgerow from that one initially infested plant to others.

Eggs overwinter within the female "bag" and hatch around mid-June in southern New England (600-900 GDD’s, base 50°F). Newly hatched larvae will disperse by crawling from the bag or they may balloon from the egg hatching site a short distance. Larvae will begin to feed and then construct the "bags" that they carry with them while they continue to develop and feed into late summer. Pupation occurs in late September into October in New England. Male moths will develop and appear moth-like but females will forever remain larval-like in appearance by not developing wings, legs or antennae. Males will seek out the females and mating occurs with the female never leaving her case. Soon thereafter, the female produces anywhere from 500-1000 eggs and then dies. The eggs will overwinter within the bag created by the female, which by that time is approximately 2 inches in length. There is only one generation per year in the northern portion of this insect’s range.

This species of bagworm is native to North America. It is distributed throughout the eastern United States to Nebraska and has historically had a northern limit to its range described as southern Michigan and in most cases at points similar in latitude. However, within the last decade, bagworms have been detected in new areas such as parts of northern Michigan and southern Ontario.

Given that this insect does not pupate until late September into October it is usually killed by frost, in the larval stage, in New England. Historically, bagworms are only a continuous problem starting at the latitude that includes Maryland and ranging south to the Gulf of Mexico. However, occasionally bagworm is a serious pest in southern New England and it is due to several factors. New populations may be brought in on nursery stock from more southern states and introduced into the landscape at planting time. They will cause a certain amount of injury during that growing season and if that location experiences a prolonged, warm autumn, the larvae will pupate and mating will occur during the following year (Childs, 2011). Given that each female can produce upwards of 1000 eggs, this pest can increase in numbers exponentially for the next growing season.

Some recent studies have considered how climate change may impact the northern boundary of this insect’s known range. One such study found that over-winter egg mortality is the biggest constraint on bagworm survival beyond their northern range limit. Egg mortality over the winter is directly related to temperatures falling below bagworm eggs’ physiological limit. Therefore, as climate change is predicted to increase minimum winter temperatures, this species may be impacted by that change. That said, predicting changes in insect herbivores due to climate change is incredibly complex. Entomologists need to consider temperature, photoperiod, individual insect herbivore phenotypic and genotypic flexibility, and many other factors.

If detected early, "bags" can be removed by hand. Hand picking bagworms and placing them in a bucket with soapy water or into a sealed container can be an effective means of management when populations are low and individual insects can be safely reached. This can be done at any point during the season, but particularly before the new generation of bagworms hatch from the overwintered eggs.

Several parasitic insects are known to reduce numbers of bagworms, with two species of ichneumon wasps being perhaps most important. However, occasionally bagworm population’s rise to damaging levels before these natural enemies can control them. Nonetheless, management strategies should preserve natural enemies.

Otherwise, Bacillus thuringiensis kurstaki (B.t.k) is effective on younger larvae. Chlorantraniliprole was shown in a study to be as effective at managing bagworms as bifenthrin and spinosad (Rhainds and Sadof, 2009). All chemical management options are most effective when directed against bagworms that are still small in size. Thorough coverage of foliage is required.

Soil application of dinotefuran was also tested and determined to be effective at managing young bagworms, particularly on small evergreen shrubs (Rhainds and Sadof, 2009).

Many additional active ingredients are labelled for use against bagworms, including but not limited to: acephate, acetamiprid, azadirachtin, carbaryl, emamectin benzoate, and permethrin. Read and follow all label instructions for safety and proper use. Contact a Massachusetts licensed pesticide applicator for assistance.

Written by: Robert Childs with updates from Tawny Simisky
Updated: 2/2020