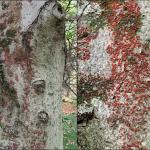 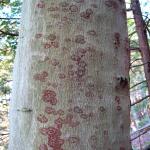 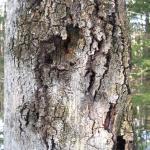 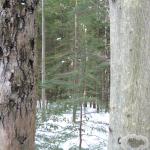 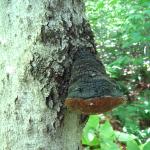 Beech bark disease (BBD) has killed millions of American beech (Fagus grandifolia) throughout New England and has drastically altered northern hardwood forests, of which beech is a primary tree species. BBD is a disease-insect complex that involves both native and non-native scale insects (Cryptococcus fagisuga and Xylococculus betulae) and two species of the fungal pathogen Neonectria (N. ditissima and N. faginata).

The scale insects predispose American beech by using their piercing and sucking mouth parts to extract fluids from the main trunk and primary scaffold branches. Trees of any size can be hosts for the scale, but larger diameter trees are more susceptible because of their size. The scales appear as small, white-colored flecks on the bark. The scale feeding wounds are then readily colonized by Neonectria, which causes a perennial bark canker that slowly kills the infected tree. Once the fungus is established, red, oval-shaped masses of fungal fruiting bodies (known as perithecia) begin to appear. They stand out in stark contrast against the smooth, grey bark. Spores can be readily washed down during rainstorms and masses of fruiting bodies often appear in vertical lines on the trunk. As more bark is killed, trees take on a rough and cankered appearance, once again this is highly distinctive in comparison to their normal, smooth-barked form. During this later stage of infection, the red fruiting bodies are no longer visible on the trunk. Secondary boring insects are attracted to the weakened trees and this in turn attracts woodpeckers and sapsuckers. Bark-cankering fungi like Neonectria do not decay wood, they are targeting sugars in the phloem tissue. However, once the bark is killed, wood-rotting fungi, such as Phellinus, can invade and further weaken the tree. Trees suffering from BBD are more sensitive to drought and cold temperature injury during the winter. Many cankering fungi are most active in early spring before trees break dormancy and sporulate during the autumn season, when trees are entering dormancy. This allows these fungi to avoid the active chemical and physical defenses of the host.

Insecticide treatments that target the scale insects, which predispose the trees to infection by Neonectria, can be one approach to managing the disease in the early stages. Systemic insecticides can be used to target the scale while they feed or horticultural oil can also be used to smother the scale. To treat Neonectria, a lower trunk drench with phosphites in both the spring (and possibly the fall as well) is recommended. Care should be taken to avoid overspray on the foliage and nearby plants, as the bark drench rate of phosphites is phytotoxic to foliage. Minimize all other stresses the tree may endure and consider fertilization to help restore vigor. Prune and remove dead branches in the canopy to avoid colonization from other cankering and decay fungi.