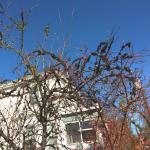 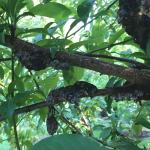 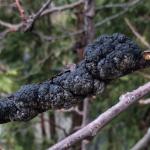 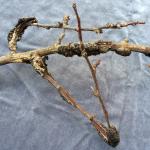 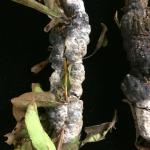 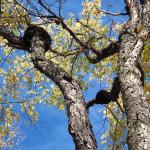 Black knot of Prunus is caused by the native fungal pathogen Apiosporina morbosa.

Black knot is a cankering disease that is sometimes highly destructive on landscape Prunus. New infections occur in the spring on succulent shoots with symptoms developing during the summer and early fall. In the months following infection, green stems become swollen but the most conspicuous symptoms are not yet apparent. As a result, the disease often goes undetected during the first growing season. Often times, the disease is first noticed early in the next growing season after infection (year two), after the twig/branch swellings have developed into thickened, abnormally-shaped, black-colored galls. The galls will continue to grow and expand as long as the stem tissue remains alive. The galls can either girdle the stems outright or cause the distorted stems to grow at odd angles. Gall and bark tissues splits open to allow for the release of fungal spores that are produced during the spring and early summer. This spore-bearing layer appears as an olive-green, velvet-like coating over the surface of the galls. The spores are splashed or blown to nearby stems to initiate new infection centers. Intact, green stems produced that season are primarily infected, although the fungus can also colonize wounds as well. Later in the summer, established galls may take on a white, dusty coating. This is the result of infection by a mycoparasitic fungus that is not a pathogen of the host (mycoparasites are fungi that attack other fungi). On certain landscape and forest trees, such as black cherry (P. serotina), very large galls develop over many years to decades on primary branches or the main trunk. Apiosporina is native in North America and is widespread in both forest and landscape settings. The disease can be found almost anywhere Prunus occur but is often more destructive on non-native trees and shrubs. If left unmanaged, black knot can be a destructive disease on plum and chokecherry, especially in shaded settings.

The dormant season is the best time to scout for black knot when foliage is not present to obscure the galls. When detected early, black knot can be effectively managed by pruning out infected branches at least 6–12 inches away from the gall, if possible. The infected stems and branches should be removed from the site. In subsequent months and years, careful scouting of nearby branches should be performed regularly to determine if new infections have established. New, succulent shoots are especially vulnerable during rainy periods in the spring when temperatures are mild. Sanitize pruning tools with rubbing alcohol or lay in direct sunlight after pruning infected trees. Chemical management will not be effective in controlling the disease when the canopy is harboring numerous galls. When disease severity is low, fungicides may help to eradicate the pathogen in conjunction with pruning. Chemicals labeled for use against the pathogen include: copper hydroxide, copper sulfate, captan and thiophanate-methyl. Some fungicides are not labeled for use on fruit intended for human consumption. Read labels carefully. Fungicides are most effective in limiting new infections in the spring when the fungus is sporulating.