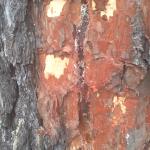 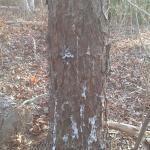 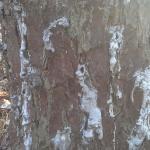 The black turpentine beetle is one of the larger native bark beetle species, reaching 3/8” long, and is dark reddish brown to black. Black turpentine beetles have one generation in the northern area of their range to three generations in the south. Multiple life stages and generations are often present because the insect is able to overwinter in all life stages. Female adults locate suitable hosts and begin boring into the bark, attracting males for mating. After mating, an egg gallery is constructed in the sapwood. Galleries are typically an upside down J shape, about 0.5 inches wide and up to 12 inches long. Approximately 100 eggs are deposited in the gallery. Eggs hatch 10-14 days later and the larvae begin feeding gregariously, often obscuring individual galleries. The larvae are whitish yellow and reach up to 0.5 inches. The larvae pupate and the adults then bore through the outer bark to re-infest the same tree or find another suitable host.

The first sign of attack by black turpentine beetles are pitch tubes about 1 inch in diameter, found on the lower 6 feet of the tree trunk. Fresh pitch tubes are composed of a resin (tree sap), boring dust, and frass (insect excrement). As the pitch tubes age, they change from white to reddish to grayish red. Often times a hole in the center of the pitch tube can be seen, indicating successful attack by the beetle; less often, adult beetles can be found trapped in the pitch. Trees will show symptoms within 3-6 months of attack, ranging from fading of foliage color to tree death. Trees with only a few attacks may only be weakened. The beetle also carries a blue-stain fungus, Leptographium terebrantis, which will further weaken trees not killed by infestation.

Black turpentine beetle prefers weakened or damaged pines but is also capable of attacking healthy trees. Prevention is an important management strategy to reduce attack. Drought and storm damage can cause widespread stress, making trees susceptible to attack. Other stresses that can increase chance of attack include mower damage, string trimmer damage, pruning during insect activity, soil compaction, and excavation. Cultural practices should focus on keeping pines stress free and growing rapidly. Damaged or declining trees should be removed quickly so as not to further attract black turpentine beetles to the area.