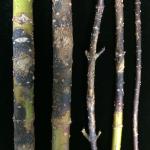 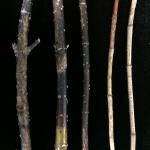 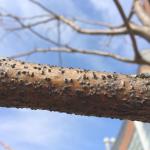 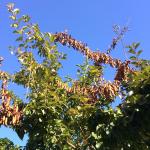 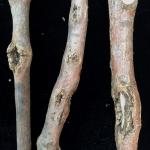 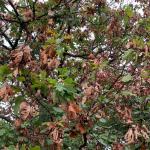 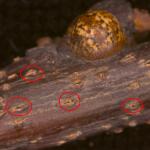 Botryosphaeria canker is an important disease of many landscape and forest trees and shrubs. To date, there are more than two dozen genera in the order Botryosphaeriales that were previously described simply as Botryosphaeria. Some of these genera are known to green industry professionals, such as Diplodia and Sphaeropsis, while many are not. Much remains to be understood about many of these genera and whether they occur on woody plants in southern New England. Therefore, for the purpose of this fact sheet they will be collectively referred to as Botryosphaeria sensu lato (s.l.).

Due to the tremendous diversity of genera and species in Botryosphaeria s.l., hundreds of woody plants are susceptible to infection, especially when plant vigor is low. Recent research has shown that few species of Botryosphaeria s.l. are host-specific, meaning that many are capable of attacking a wide array of trees and shrubs. However, the most commonly afflicted plants on the landscape in our region include apple/crabapple, cherry, dogwood, honeylocust, elm, oak, ash, holly/inkberry, maple, pine, spruce, hemlock and rhododendron/azalea.

The cambium and sapwood of weakened trees are vulnerable to extensive cankers that disrupt or cease transport of water and minerals beyond the infection site. Typical symptoms are the sudden browning of leaves during the growing season or failure to leaf out in the spring. However, symptoms can be highly variable depending on the host and predisposing stresses present. The extent of Botryosphaeria canker infections can range from small areas of necrotic bark to girdled shoots and branches to extensive cambial death spanning several feet along the trunk. When infections are severe, woody plants often produce an abundance of water sprouts from the trunk and exhibit discolored and sloughing bark. Winter injury, drought stress, repeated insect defoliation, root disease, excessive pruning and other physical wounds often predispose trees and shrubs to infection. In general, Botryosphaeria s.l. species behave as opportunistic pathogens that attack weakened and stressed hosts. In addition, many Botryosphaeria s.l. species can survive as endophytes, invading hosts and causing no observable symptoms for long periods of time until plants become stressed. These latent infections can rapidly expand to cause severe dieback on trees and shrubs suffering from transplant shock. Once established in the canopy, the fungus forms small, black-colored fruiting structures (pycnidia and/or pseudothecia) that erupt through the bark. Persistent wet weather, primarily during the spring, facilitates spore dispersal by running/splashing rainwater and wind. Other means of spore dispersal include insect feeding and the use of contaminated pruning tools. Spores will germinate and invade any wounds or natural openings present in the bark. The fungus overwinters within infected and dead branches in the canopy or those that have fallen to the ground.

As with any opportunistic pathogen, minimizing stresses that predispose woody plants to infection is critical. Avoid excessive pruning, especially on recently transplanted trees and shrubs. Irrigate on regular intervals during extended dry periods to minimize drought stress, fertilize if soil mineral levels are inadequate, maintain a layer of well-composted organic mulch over the root zone to retain soil moisture and limit mechanical wounds (e.g. string trimmers) and avoid needles branch, stem, and root damage. Regular sanitation pruning should take place, especially for trees and shrubs with thin bark (e.g. beech, Japanese maple, dogwood), to remove low-level infections that may be present in the canopy. Avoid pruning during wet periods in the spring as this is the time period when the fungus is most actively sporulating and sanitize pruning tools after working with plants known or suspected of being infected by Botryosphaeria canker.