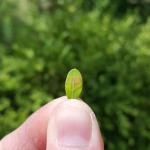 The boxwood leafminer is a major pest of boxwoods, a common ornamental shrub. Likely introduced to the United States on potted boxwood sometime in the mid-1600's, this pest from Europe feeds (by creating mines) on leaf tissue between the upper and lower leaf epidermis. This causes blistered leaves that weaken the plant and can cause premature leaf drop. Despite its early introduction, this insect was not reported at pest levels until the early 1900's in Kingston, RI. Boxwood leafminer is common wherever boxwood grows in the United States (found from coast to coast) and is probably the most economically significant pest of boxwood.

The boxwood leafminer overwinters as a partially developed larva in the leaves. The larvae become active in the warming spring, resume feeding, and are bright yellow/orange in color and concealed within their leaf mines. As they feed, the upper side of the leaf swells slightly, while the lower side develops a blotch-shaped blister that turns yellow or brown. This gives the leaf an overall puffy appearance. Breaking open a boxwood leaf blister reveals 2-6 larvae, also known as maggots. As larvae grow older, the blisters develop a clear spot, or window. Larvae mature into orange colored pupae by late April. Adults emerge by mid-May or early-June (typically during the bloom of Weigela florida, Bob Childs) and are tiny (2-3 mm.), leaving behind a pupal case that may cling to the leaf following adult emergence. Adults are yellow-orange and look like gnats (flies). The female fly will lay approximately 29 eggs, inserted deeply into the upper surface of the current season's leaves. Females die within a matter of hours following laying their last eggs. Eggs hatch and larvae begin to mine the leaves and grow slowly through the summer. Many larvae may be found in the same mine and are protected from contact insecticides. There is one generation of boxwood leafminers per year.

English boxwood (Buxus sempervirens 'Suffruticosa') is rarely attacked by this fly. Foliage of susceptible species and cultivars may be heavily mined. Undersides of boxwood leaves will have yellowed mines present. Infested leaves may be yellow, spotted, and drop prematurely. Plants appear sparse and foliage is no longer dense, as in a healthy boxwood. Frequent, persistent attack by this pest may lead to branch dieback and weakened plants more susceptible to abiotic stressors or disease. Boxwood leafminer infestation might make plants grown in colder climates more susceptible to winter kill.

Monitoring for boxwood leafminer can be done at several points throughout the season.

The difficulty in managing boxwood leafminer lies in the fact that most of their life cycle occurs while they are protected within the boxwood leaves. They are most vulnerable as adults, a stage that only lasts 2-3 weeks, so applying applicable chemical management options requires precise timing. However, combining other strategies with chemical management can reduce the presence of this pest.

As always, maintaining a healthy plant prior to infestation is the first step to mitigating most insect pests. Ensure that boxwoods have adequate water, sunlight, proper planting and site conditions, etc.

When planting new boxwoods, choose more resistant varieties to minimize the effects of boxwood leafminer. Varieties with more resistance include, but may not be limited to:

Heavily pruning (if practical) all first-year growth (by pruning branches back about ⅓ of their length) after egg-laying in June will remove infested leaves. Destroy clippings and do not dispose of near plants. Manually crushing the insects while present within the leaves may not be practical due to time constraints.

There are no known biological control measures or effective natural enemies for boxwood leafminer.

Use contact insecticides labeled for use on boxwood leafminer during their adult emergence in mid-May or early-June. Monitoring techniques should be used to confirm the presence of the pest before applications are made.

Systemic insecticides can be applied as a soil drench, including, but not limited to, clothianidin* and imidacloprid*. Foliar absorbed active ingredients may target immature life stages as well. Target early instar larvae, which may be more susceptible. Select alternative management options to systemic insecticides whenever possible, to avoid potential negative impacts on pollinator populations. Make insecticide applications after bloom to protect pollinators. Applications at times of the day and temperatures when pollinators are less likely to be active can also reduce the risk of impacting their populations.

Remember when using pesticides that the label is the law. No product should be used in a manner that is contrary to its label. Read and follow all label instructions for safety and proper use. Make sure that the product you select is labelled for use against the pest you wish to manage, on the site to which it will be applied. *Neonicotinoid insecticides cannot be applied to trees or shrubs in Massachusetts except by an individual with the proper licensure or certification from the MA Department of Agricultural Resources.