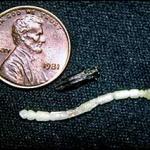 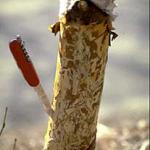 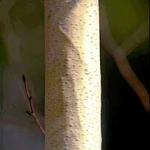 Tunneling by the larvae in the vascular portion of the wood leads to a girdling of the tree and death. Larvae make a "tortuous", (winding) mine that severely injures the vascular system. Initial symptoms may be chlorotic foliage and a thinning canopy. Attacked trees that survive will form callous tissue in the mines that become raised areas visible through the bark. Adult emergence holes, through the bark, are "D"-shaped. This pest cannot be successful in a healthy tree.

Adults are active from approximately mid-June until September in Massachusetts. Females lay eggs in roughened areas of bark on the main trunk and the larvae soon hatch and tunnel through the bark and begin mining in the vascular area by making a winding tunnel which often parallels the grain of the wood. This pest over-winters as uneven-aged larvae in the wood of the host tree. Larvae take from 1-2 years to mature.

GDD for adult emergence is 440 - 800 but they remain active much longer.

The most important factor in the management of this pest is to keep the potential host plant healthy, which prevents invasion. This pest cannot physically survive in a healthy tree. Limiting the negative effects of the birch leaf miner and drought goes a long way in preventing the bronze birch borer. Susceptible birches should not be pruned during the adult flight period from June into September; this releases plant volatiles and may attract more egg-laying females. Reserve pruning for the fall and winter months. Once the larvae are in the tree they are very difficult to manage. Any residual-effect chemicals applied to the trunks to deter/kill egg-laying adults may have to be applied every ten days at three intervals; this practice may not be acceptable in certain cases. During the early stages of invasion, certain systemic insecticides may be effective.