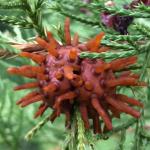 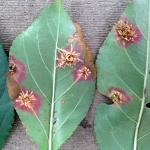 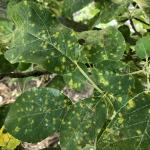 Like many rusts caused by species of Gymnosporangium, rosaceous trees and Juniperus species are required for the fungus to complete its life cycle. The fungus primarily infects apple/crabapple (Malus), eastern redcedar (Juniperus virginiana) and Rocky Mountain juniper (J. scopulorum). However, several other Juniperus species are also susceptible to infection, such as J. chinensis, J. horizontalis and J. communis. The disease also occurs rarely on hawthorn (Crataegus).

The most frequently noted symptom of cedar-apple rust is the bright red-orange-yellow spots that develop on apple/crabapple leaves in mid-summer. However, the season’s first symptoms begin much earlier in the spring on Juniperus. Junipers harboring the pathogen develop 0.25–2” diameter, rounded galls on infected needles and twigs. In some cases, the galls can be much larger. During prolonged wet periods in the spring, typically from late April to late May in southern New England, the juniper galls secrete orange-brown gelatinous tendrils (known as telial “horns”). Non-infectious spores (teliospores) coat the tendrils and germinate in place, subsequently releasing infectious spores (basidiospores). These infectious basidiospores drift on local air currents, mostly during the night and early morning, to infect the foliage of susceptible apple/crabapple. If they land on leaves that remains wet for periods of 4–6 hours, infection takes place. Several weeks after infection, yellow spots begin to form across the surface of the leaves. By mid-summer, the spots become orange to red and develop a swollen mass with cream-colored tendrils on the underside (known as aecia). Aecia release spores (aeciospores) that are wind-dispersed to nearby juniper trees and shrubs in late summer to early autumn. Initially, infected juniper needles and twigs show no symptoms of infection. However, during the following spring and summer, small green swellings (immature galls) are formed. The galls reach full size by the end of the growing season (approximately one year after infection) but do not mature and develop the gelatinous tendrils until the following spring (approximately 20–22 months after infection).

In many landscape settings, cedar-apple rust causes little, if any, lasting damage to both junipers and apples/crabapples. At times the disease can result in premature leaf shedding and reduced fruit yield. If possible, avoid growing susceptible junipers in close proximity to crabapples and apples. While most basidiospores infect apple and crabapple trees within a few hundred yards of the juniper host, basidiospores are capable of traveling several miles. If the disease is a problem and avoidance or replacement is not an option, grow rust-resistant varieties of Malus. Apple cultivars with considerable resistance to cedar-apple rust include: Delicious (red), Empire, Keepsake, Liberty, McIntosh, Milton, Niagara, Paulared, Regent, Spartan, and Viking. Additionally, there are a number of resistant crabapples, such as: Adams, Candied Apple, Chestnut, Dolgo, Kelsey, Sargent, Snowdrift, and Thunderchild. Fungicides are not recommended for control of this disease because of the long periods of time when spores can infect both apple and crabapple (spring to early summer) and junipers (late summer to early autumn). Pruning of apples and crabapples to promote light and air flow, especially on interior branches, can help to reduce leaf wetness, a prerequisite for infection. Prune dormant galls from junipers during the fall, winter and early spring before the orange-colored spore tendrils are formed.