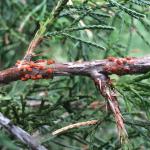 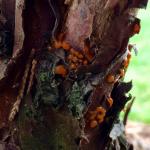 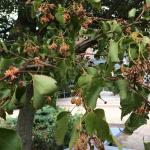 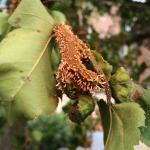 On Juniperus, the pathogen produces red-colored pads of fungal tissue (known as telia) that swell from infected stems and branches in the spring (late April to late May). After periods of rain, the pads swell and become orange, gelatinous masses of spores that are dispersed by wind and splashing rainwater. While these cankers can girdle small branches, resulting in canopy dieback, infected branches often persist and the cankers become a perennial source of inoculum in the tree's canopy. Rocky mountain juniper appears particularly susceptible in our region, even in sunny and exposed settings. The spores (basidiospores) produced on Juniperus disperse on air currents to infect nearby rosaceous hosts. On quince and hawthorn, the pathogen is most conspicuous on the fruit and leaves, producing pinkish-colored tendrils (known as aecia) in mid- to late summer. Stem cankering and subsequent distortion can also occur on these hosts. Serviceberry can be severely impacted by the disease, with numerous stem cankers leading to a progressively worsening canopy dieback. The dense canopies and small-diameter stems on shrub serviceberries provide ideal conditions for disease development. Infections tend to develop on lower, shaded branches and then spreads upward in the canopy. Spores produced on rosaceous hosts (aeciospores) are dispersed from mid-summer through early autumn to infect Juniperus, completing the life cycle. Rust fungi, like nearly all fungal pathogens, require free moisture on plant surfaces for spores to germinate and infect. Once established, they produce large amounts of pigmented spores that resist ultraviolet light better than most fungal spores. This allows them to travel longer distances on air currents.

A common management strategy for rust diseases caused by Gymnosporangium species is to remove one of the two hosts required for the fungus to complete its life cycle (either the juniper or rosaceous tree/shrub). Typically, when a Juniperus species and rosaceous tree or shrub are very close together, then host removal can often reduce disease incidence and severity. However, because rust spores are capable of traveling such long distances, removal of one of the hosts from the property may not adequately control the disease. Rarely are fungicides recommended to control cedar-quince rust, mostly because none have been found to be very effective. This is due, in part, to the long period of time in which spores can disperse to infect either host, both in the spring (Juniperus to rosaceous host) and in late summer and early autumn (rosaceous host to Juniperus). Prune out and discard any girdled stems and branches that develop and prune to promote air flow and sunlight, especially in the lower canopy. Avoid planting rosaceous hosts in close proximity to Juniperus. In areas where disease severity is high, plant resistant species or cultivars to avoid exacerbating disease pressure.