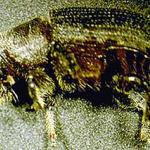 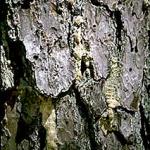 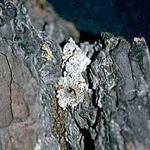 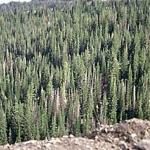 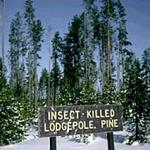 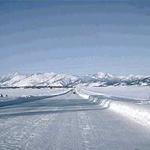 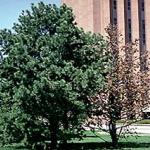 In the Northeast, primarily pines (Pinus) but also others, such as fir (Abies), spruce (Picea), arborvitae (Thuja), others.

In the Northeast, the primary concern with conifer bark beetles is associated mostly with weakened pines in the forest and landscape. Stress factors that predispose a pine to bark beetle attack include drought, insufficient roots at transplanting time and old age. Younger and healthier pines produce ample amounts of resin necessary to repel bark beetle attack. Weakened and wounded pines may also emit plant volatiles into the air that act as a strong attractant for the bark beetles. Most conifer bark beetle species are very small (often 1-3 mm) with one of the largest being the black turpentine beetle (Dendroctonus terebrans (Olivier) at about 5/8" (8-10 mm) in length.

Many conifer bark beetle species overcome what is left of a tree's natural defenses by utilizing a strategy known as mass attack. One or several beetles of the same species will find a suitably weakened tree for colonization and then emit an aggregation pheromone (a chemical message) that attracts countless numbers of their species to that one tree. All of them then chew through the trunk to the vascular area and cause pitch to flow out. Once the pitch hardens sufficiently, they bore through this pitch glob into the tree again and allow more pitch to flow from the same spot. This process is repeated until the tree's supply of resin is exhausted. Hardened pitch globs, with a hole in the center, are often very obvious on the trunk of a tree that has been severely attacked and these are known as pitch tubes or pitch volcanoes. Once the tree's natural defenses are gone, the beetles can then colonize that tree by the thousands and kill the host. Bark beetles make unique galleries (tunnels) under the bark at the inner bark / outer wood interface and lay eggs there. The larvae, upon hatching, will feed in this narrow, nutrient-rich area and then pupate and emerge as adults. A group of bark beetles known as Ambrosia beetles are able to tunnel into the wood of the host and live in this nutrient-poor environment by transporting specific fungal spores on their bodies that grow within the galleries. These fungi stain the wood, and along with the tunneling, can greatly reduce the harvest value of timber. In the Northeast, one of the common and serious bark beetles is the black turpentine beetle (Dendroctonus terebrans (Olivier). This pest is primarily a problem in coastal areas on Japanese black pine and pitch pine. Pitch pine is usually considered to be tolerant of salt spray and harsh conditions but repeated hurricane-force storms in the last several years, coupled with people pressures on Cape Cod, has resulted in many of these trees being weakened and attacked by this beetle. The Black turpentine beetle primarily colonizes the host tree on the first 8 feet of trunk.

Maintaining tree health is essential for preventing most bark beetle attack. Watering during times of drought and, if possible, heavily watering the soil around a tree and "washing" the foliage after a serious storm that contained a lot of salt-spray, to remove excess salt, may help to prevent added stresses. Some chemical sprays may be utilized to reduce re-infestation but this may require the repeated use of residual pesticides.