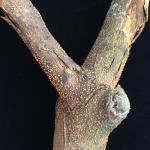 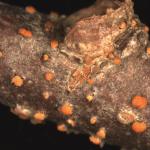 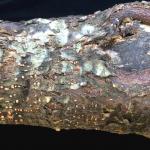 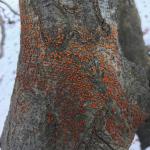 Coral-spot canker gets its name from the orange- to pink-colored, erumpent pads of fungal tissue that are frequently present on stems and branches of infected trees. These pads represent the fruiting bodies produced by Nectria, which are often very conspicuous in contrast with the bark. The pads release large volumes of spores that are splashed, washed or blown onto nearby branches, allowing the pathogen to establish new disease centers. Pruning wounds are a common source of entry for the pathogen although many other major to minor wounds can facilitate infection. Once established, the fungus can be very difficult to eradicate. Nectria primarily acts as an opportunistic colonizer of stressed or damaged trees and shrubs. Like many cankering fungi, Nectria kills the bark, cambium and outer sapwood as it obtains sugars from the host. The fungus does not actively decay wood, but the infection sites can be colonized by wood-rotting pathogens. Cankers often develop and expand when the host is dormant and branches may be girdled and fail to leaf out the following spring. Branch lesions may appear sunken or water-soaked during the early stages of disease development. Over time, cankers with callus tissue on the margins and sloughing bark often develop. Additional symptoms of infection include sparse or undersized foliage, premature leaf shedding and branch dieback.

When a tree infected by Nectria is present in the landscape, extreme care should be taken when pruning neighboring trees, to limit the potential spread of the pathogen. Pruning infected stems and branches, to physically remove the pathogen, is critical for disease management. The fungus is often present in wood tissues distal to those with noticeable symptoms, such as cankers or dead patches of bark. Therefore, ensure 2–3′ of clean wood is present between the canker and the pruning site, if possible. Regularly sanitize pruning equipment when working with trees or shrubs known to be infected by Nectria. Once infected branches are removed, continue to scout the canopy in subsequent years to ensure the fungus was fully eradicated. Chemical management against cankering fungi is difficult, as fungicides may fail to contact the target pathogen within woody tissues. However, in certain cases a locally systemic fungicide, such as azoxystrobin, pyraclostrobin or thiophanate-methyl, maybe applied in conjunction with pruning to protect high-value trees and shrub. A lower bole or branch drench with phosphites may also be effective against Nectria, especially when infections are present on large scaffold branches or the main trunk, limiting the ability to prune these infected parts. Keep in mind that Nectria can survive as a saprophyte and may linger in the canopy if dead branches are not pruned.