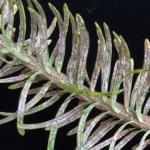 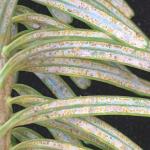 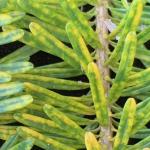 The Cryptomeria scale, Aspidiotus cryptomeriae (Kuwana), was introduced into North America from Asia and has become a serious pest from southern New England to the southeast, especially at Christmas tree farms. To date, this pest is uncommon in Massachusetts, occurring only in southeastern portions of the state. This armored scale causes yellow mottling of needles on lower and inner branches and premature needle drop. The symptoms are similar to those caused by a much more widespread pest, the elongate hemlock scale (Fiorinia externa). The onset of damage can be rapid and spreads quickly across individual trees and through plantings. Cryptomeria scales can be found on the undersides of needles and often occur in two long rows running up either side of the needle. The scale is described as having the appearance of a fried egg, as the feeding nymphs and adult females are yellow but they produce a dense protective wax coating which is oval-shaped and white. Adult males are winged and are rarely seen since as they are very short-lived.

Cryptomeria scale occurs on many conifers but is most common on true fir (Abies spp.) and hemlock (Tsuga spp.).

Cryptomeria scale overwinters as immature nymphs within a waxy covering on infested needles. In early-spring, nymphs resume feeding and continue to grow and their discarded shells accumulate under their covers, contributing to the "fried-egg" look. Males undergo a pupal stage and emerge as winged adults that fly off to find adult females. After mating, males die and in late-May to early-June the females lay about 40 eggs within their protective coverings. Eggs hatch to produce crawlers which spread to other branches or adjacent trees. Crawlers are fragile and need to establish within one day of hatching, so many crawlers do not travel far and feed right under the dead female. A second generation of crawlers emerges in late-August. There may be overlap between generations as not all nymphs mature at the same time, making management difficult to time.

Check nursery stock carefully for the presence of Cryptomeria scale before planting. Begin scouting for Cryptomeria scale in late-winter to early-spring by examining the undersides of needles, especially on interior sections of lower branches. Look for trees with yellow mottling of needles. Cryptomeria scale can cause economic damage to trees when just a few insects occur per needle. Emergence and flight of males can be monitored by placing yellow sticky cards on infested branches, egg hatch will follow their flight by two to three weeks (or once 600-800 growing degree days have accumulated). A second generation of crawlers will emerge after accumulation of 1750-2130 growing degree days. Remove and discard trees that are heavily infested or prune out badly infested branches if the pest is limited to the lower portion of the tree.  Keep pruning equipment and mowers clean and sanitize tools after working in infested areas to limit spread of the insect. Beneficial insects such as the twice-stabbed lady beetle (Chilocorus stigma) feed on armored scales (including the Cryptomeria scale) and help to keep their population numbers down, so broad-spectrum insecticides should not be used. If overwintered scales are present in spring, dormant oil can be applied prior to bud break, ensuring thorough coverage of lower needles. Dinotefuran is labeled for use against Cryptomeria scale and has shown high levels of efficacy when applied as a bark drench to the lower trunk.