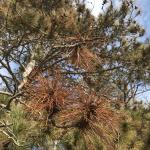 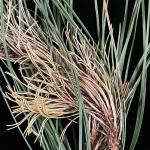 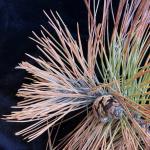 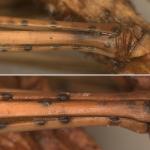 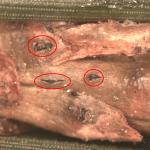 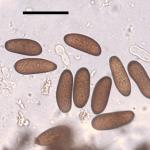 Diplodia sapinea causes a tip blight, cankers on stems and branches and, at times, death of two- and three-needle pines in the region.

Diplodia shoot blight can be a very destructive disease for two- and three-needle pines in New England. The fungus also occurs on five-needle pines (e.g. eastern white), but damage usually only takes place when trees are stressed. Diplodia can attack a wide array of additional conifers but most often these trees are suffering from severe abiotic stresses, such as drought. While many cankering pathogens require a predisposing stress to become established, prior stress is not required by Diplodia for infection. Although in general terms, cankering fungi typically become established through some type of wound. Wounds caused by wind, insect feeding, pruning or shearing operations and hail/snow/ice are typical infection sites. Current-season buds and shoot tips are attacked, leading to tip blight, stunted and/or wilted needles, resin flow on declining or dead shoots and a general dieback in the canopy near branch tips. Although Diplodia primarily infects new shoots, in can infected older stems through wounds. The most conspicuous symptom of Diplodia blight is stunted current season’s shoots with undersized brown needles. The cankers on infected stems often become encrusted with resin making the shoots hard. New shoots throughout the crown may be infected, although damage is generally first evident in the lower crown. Vigorous trees confine infections to the new shoots. Severely weakened trees can have entire branches die as a result of infection. Repeated infection reduces growth, deforms trees and ultimately results in tree mortality. Spores of the pathogen develop in small, black-colored fruiting structures that form on needles, fascicle sheaths, second-year cone scales, and stem bark. Spores are dispersed by splashing rain water and wind from March to October. New shoots of Austrian, mugo, ponderosa, red, and Scots pine are most susceptible when buds begin to open until the needles are fully elongated. Spores require wet conditions in order to germinate and penetrate needles and shoots. Once the fungus penetrates the needles, tissues are rapidly destroyed, resulting in stunted shoots and needles. Diplodia sapinea survives the winter within the fruiting structures that develop in killed tissues.

Remove all dead tissues that have fallen to the ground that may harbor the fungus and allow it to persist at the site. If left, Diplodia will be able to produce and disperse spores that may initiate new infections the following season. Prune and discard all blighted shoots and stems to reduce inoculum present in the canopy. For large and mature trees, this may be an unrealistic task. Badly infected branches can be pruned to improve aesthetics and reduce inoculum. Avoid fertilization if Diplodia blight is well established in the canopy. It has been shown that disease severity increases after nitrogen fertilization. The fertilization promotes the production of succulent shoots by the tree and these are easily infected by the fungus. Fungicides labeled for use in the landscape against Diplodia include: azoxystrobin, azoxystrobin+propinconazole, boscalid+pyraclostrobin, copper salts of fatty and rosin acids, copper hydroxide, mancozeb, thiophanate-methyl and trifloxystrobin. Fungicides are most effective when applied before bud-break and on 7-10 day intervals thereafter. Continue to regularly monitor the tree, and prune out any shoots that exhibit symptoms of dieback.