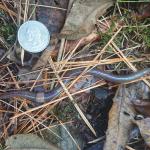 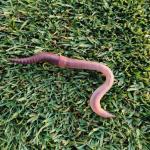 Earthworms are not insects. They are classified within the Phylum Annelida (segmented or ringed worms) and Class Clitellata (worms possessing a type of collar structure which holds importance during reproduction and can be used in identification). Glacial activity in the Pleistocene is thought to have eliminated what would have been most of the native earthworm species from Canada and the northern United States at the time. Few native earthworms remained in the areas impacted by the glaciers by the time of European settlement. Since then, at least 45 non-native species of earthworms have been introduced into North America (north of Mexico) from areas such as Europe, Africa, Asia, and South America (Hendrix and Bohlen, 2002). According to past literature, at least 21 species of earthworms have been collected from various locations in Massachusetts.

The majority of the species found in Massachusetts belong to family Lumbricidae, commonly also known as Lumbricids or European earthworms. Despite the diversity within this family, members of the Lumbricidae share a similar biology, life cycle, and ecology. Earthworms of this group produce cocoons at any time of the year with the peak occurring in the spring, a second smaller peak in fall, and the lowest cocoon production occurs during the winter (Reviewed by Lee 1985). Hatching occurs in the spring and earthworms of this group can live up to 10 years, but most vigorous growth happens during the first couple of growing seasons. Lumbricids are relatively cold tolerant and adapted to survive cold temperatures during the winter by burrowing below the freezing point. It is unlikely to see these earthworms active during the summer, since they are not tolerant of hot temperatures and survive the summer in a quiescence or resting stage.

Most notable members of this group are Amynthas spp. commonly being referred to as “jumping worms, crazy worms, or snake worms”, among other names. This group of earthworms has been receiving a lot of attention recently due to their invasive nature. Previous records indicate the presence of Amynthas agrestis in Massachusetts, however it is possible that other related species might also be present. Amynthas agrestis, for example, was previously reported in Hampshire County on October 9, 1974 and Suffolk County in Boston, MA as reported by Gates (1953) and at the time referred to as Pheretima agrestis (Reynolds, 1977).

Amynthas spp. do not tolerate the winter temperatures in New England, and it is believed that the adults and juvenile earthworms die off during the winter, only cocoons survive to the next season. Next spring, the immatures emerge and the life cycle begins again. Usually one or two peaks of cocoon production occur per year. Unlike European earthworms, they are active during the summer, and they have an annual life cycle (worms do not live more than one year).

Species Known Previously to Massachusetts and their Origins

The following table of earthworm species previously detected in Massachusetts, along with their origins, is adapted from Reynolds (1977) and Hendrix and Bohlen (2002).

Past Recognized Benefits of Earthworms

In agricultural and pastoral systems, earthworms have often been shown to have beneficial impacts to soils. In these specific locations, the fact that earthworms can increase the rate of plant litter decomposition and increase nutrient transformation and plant nutrient uptake are seen as valuable impacts of these organisms. Other positive influences earthworms have in these locations include improvement of soil aggregation and porosity, along with enhanced water infiltration and solute transport (Hendrix and Bohlen, 2002). Essentially, earthworms can be beneficial in agriculture due to positive impacts on soils in those settings, increased nutrient and water availability, and the stimulation of certain microorganisms that in turn stimulate plant growth.

Why is there Concern?

Certain aspects of earthworm (both Lumbricids and Amynthas spp,) activity and the ecological impacts they can have are considered undesirable in certain locations, such as forests. Such impacts include, but are not limited to: removing and burying soil surface “residues” which otherwise can protect soils from erosion, increased erosion due to the production of casts, increased compaction of surface soils, nuisance deposition of casts on lawns and golf courses, dispersion of weed seeds in certain environments, transmission of plant and animal pathogens, increasing the loss of soil nitrogen (leaching and denitrification), and increasing the loss of soil carbon through enhanced microbial respiration (Hendrix and Bohlen, 2002). Changes in forest soils caused by earthworm presence also triggers cascades of consequences resulting in significant changes in understory species composition in favor of invasive flora and fauna.

Recent Extension, outreach and scientific publications have called to light concerns that Amynthas species (non-lumbricids) pose even more risks to forests and perhaps even landscapes through their ability to alter the soil structure and chemistry of these locations. They are able to consume a critical layer of organic matter that supplies nutrients vital for other wildlife, particularly in forests. The current concern seems to be that certain species of Asian origin may devour organic matter more rapidly than their European counterparts. Some state Departments of Environmental Conservation (such as New York) are going so far as to prohibit the possession, sale, import, purchase, or transportation of these species.

Recent reports regarding the species referred to as jumping or crazy worms cite a marked reduction in the amount of leaf litter on the forest floor or rapidly disappearing garden mulches as issues directly noticed by concerned citizens where these worms are present. Even wood chips are being reported as rapidly consumed where these species are present.

NOTE: It should be mentioned that the genera of earthworms commonly referred to as jumping worms are not directly harmful to people or their pets. Although they may quickly writhe or squirm when disturbed and may move like snakes, they pose no direct physical threat to people.

What Can Concerned Citizens Do?

There is no permanent “cure” or method through which earthworm species of concern can be eradicated due to their long history in North America and Massachusetts (since European settlement for some) as well as aspects of their biology. And most of the time, management of earthworms is not justified because of prevailing benefits in the landscape and agricultural settings.

With regard to jumping worms, these species are not known to overwinter as adults, but rather perish with the onset of cold temperatures, but their young (eggs and immatures) are able to survive in tiny, resilient cocoons which are very small in size and the color of the soil surrounding them. Therefore, these cocoons can be nearly impossible to spot with your own eyes and are easily moved (albeit accidentally) in these substrates.

It seems that at this time, if a citizen is concerned about these earthworms, they can aid in reducing their spread by avoiding actions that increase their rate of distribution through human mediated movement. Reportedly, jumping/crazy worm species naturally expand their range very slowly (up to 40 ft. per year). For example, a best management practice may be to avoid purchasing these species for fishing bait or vermicomposting, or avoid moving soils or compost where these worms are present to new geographic locations.

If you think you have “crazy worms” in your garden, do not panic. While you may not be able to eliminate them from your garden, you can still play a part in preventing their spread.

Lee K.E. 1985. Earthworms: Their Ecology and Relationships with Soils and Land Use. Academic press. 411.

Reynolds JW, Görres JH, & Knowles ME 2015. A checklist by counties of earthworms (Oligochaeta: Acanthodrilidae, Lumbricidae and Megascolecidae) in the states of Maine, New Hampshire and Vermont, USA. Megadrilogica 17: 125–140.