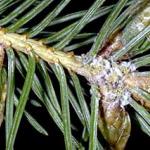 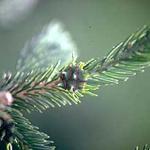 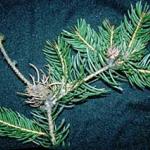 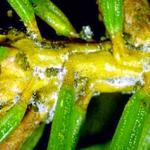 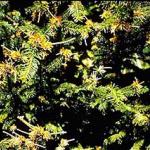 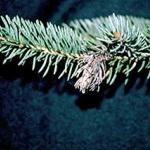 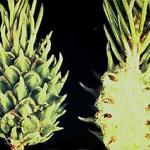 The Eastern spruce gall adelgid causes galls to form at the base of the new shoots, in the spring. These galls will be about 3/4" in total length and be pineapple-shaped. By autumn, these galls are brown and the shoot growth beyond them is dead. In heavy infestations, or after years of repeated infestation, the host tree will have the appearance of dying from the perimeter inward. Extended infestations can greatly weaken the host to a point where secondary attackers (insects and diseases) can then successfully colonize and perhaps even kill the host. In Christmas tree plantations, this pest can render trees unfit for sale. Another gall, that is sometimes found on the same host plants as the Eastern spruce gall adelgid, is caused by a midge (a small type of fly). This midge gall (Mayetiola piceae Felt) is usually of little importance.

Over-wintering immature females can be found at the base of the buds on the host plant. In the early spring, they resume development and produce eggs about the time of budbreak. These eggs hatch in about ten days and the immatures begin to feed on the new needles. This feeding stimulates gall formation, which surrounds the nymphs. New galls will almost appear to be normal green growth but only close inspection, at this time will reveal the abnormality. By late August, these galls will dry, crack open and the immature adelgids will emerge and mature into winged, egg-laying females. The eggs, usually found on the needles, will hatch in late summer and the nymphs will settle down at the base of the new buds on healthy shoots.

Galls dry and open between 2000 and 3000 GDD which is approximately late August into October, in Massachusetts. Mostly, this occurs closer to the beginning than to the end of this specific GDD spectrum. Applications of horticultural oil sprays are extremely effective in managing this pest prior to gall formation. They can be administered either in the late summer or in the early spring before budbreak and whenever the correct weather conditions prevail. Once galls have started to form there is virtually no management strategy. Pruning or shearing of the branches, at a level that removes the galls, usually requires the removal of too much foliage.