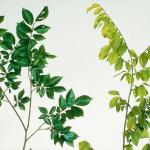 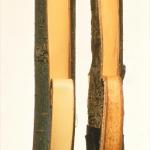 Elm yellows symptoms begin in mid to late summer with the chlorosis and drooping of petioles of turgid leaves and premature leaf loss.  Generally, symptoms abruptly appear within a few weeks and are visible throughout the crown, but occasionally yellowing will begin on scattered branches and over a couple of years spread throughout the crown.  In some situations, trees wilt and die quickly without prior symptoms.  Within lower branches the inner bark (phloem) yellows (instead of the normal white color), then develops tan flecks, and eventually dies.

There is no way to prevent or cure elm yellows phytoplasma infections.  Remove infected trees.  Grow Asian and European elms in areas where elm yellows is present.