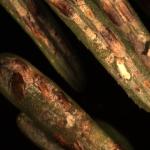 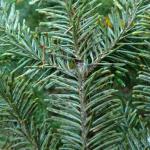 The elongate hemlock scale (Fiorinia externa; EHS) is primarily found infesting eastern hemlock (Tsuga canadensis) and Carolina hemlock (Tsuga caroliniana), along with fir (Abies spp.) and spruce (Picea spp.). Elongate hemlock scale is an armored scale, non-native to the United States and first observed in New York in 1908. This invasive insect from Asia (native to Japan and eastern Asia) has since moved throughout the state of Massachusetts and parts of the coastal Northeast in landscaped as well as forested areas. EHS is a common problem for Christmas tree farms, landscapers, and nurseries, as it uses piercing-sucking mouthparts to feed on its hosts, weakening or killing the tree.

Adult female elongate hemlock scales (EHS) are covered with an orange-brown waxy coating (test) that is approximately 1/20th of an inch long and longer than it is wide. The adult female and her eggs are yellowish-orange in color, as is the crawler or mobile stage. The immature males are slightly smaller and coated with a whitened-waxy test, which can sometimes appear to be covered in threads of white wax. Adult males are tiny, winged, and mobile and fly to the stationary adult females to mate.

Multiple life stages may be present throughout the growing season. Egg hatch generally occurs by the end of May or beginning of June, leading to the movement of crawlers from underneath the female’s test (waxy covering), which settle at the underside of host plant needles, where they feed using their piercing-sucking mouth parts. Males and females mature, and the winged males then seek out matured females to mate. These mated females produce further eggs beneath their hardened coverings, and many life stages may overwinter. However, this insect primarily overwinters as eggs or fertilized females. These overlapping life stages can make management difficult. In the Northeast, one generation per year has been observed, whereas warmer areas in the southeastern United States may experience two generations per year.

Elongate hemlock scale damages the host by inserting its piercing-sucking mouthparts into the needle tissue and sucking out the fluids of the plant’s mesophyll cells (not the vascular system). This can cause chlorosis of the needles, premature needle loss, branch and limb dieback (dieback often occurs after a density of 10 scales/needle is reached), and may also contribute to the eventual death of the tree, especially in the presence of other pests or when populations are high. EHS often weakens the tree to the point where other pests and diseases find it easy to invade. This is why trees (depending upon the host species) infested with EHS often also have hemlock woolly adelgid (Adelges tsugae), hemlock borer (Phaenops fulvoguttata), Armillaria root rot, or other problems.

There is no set economic threshold for elongate hemlock scale, but typically it should be treated when found, especially if the trees are showing symptoms of stress. (As mentioned previously, dieback often occurs after a density of 10 scales per needle is reached.) To scout for EHS, look for the following:

Examine at least 15 trees in the area (or per block at a Christmas tree farm), working from the bottom up. Examine the underside of needles on multiple years of growth, on alternating sides of the trees being examined. Record the ratio of infested trees to total trees examined, and how severe each infestation is. If a symptomatic tree is noticed it should either be tagged for later inspection or checked at that moment.

Maintaining healthy trees is the first step in staving off an elongate hemlock scale infestation and a best management practice when looking to reduce the impact of any pest pressure. This includes adequate watering, particularly of drought-stressed trees.

Fertilizing trees with elongate hemlock scale, particularly with nitrogen-based fertilizers, is discouraged. The added nitrogen may lead to population increases of the scale.

In some cases, highly infested landscape trees may be removed and disposed of away from healthy host plants. This option may be desirable for those who do not wish to make chemical applications to manage this insect, or in environments where chemical applications would be particularly risky for ecosystem health.

There are several parasites and predators of the elongate hemlock scale, but they are said to provide limited control in managed landscapes.

Several natural enemies of hemlock scales are present under natural conditions. A parasitoid wasp, Encarsia citrina, regularly kills approximately 90% of the elongate hemlock scale population in Japan and is considered to be well established in the United States (Abell and Van Driesche, 2011). The predatory beetle, Cybocephalus nipponicus, also attacks the elongate hemlock scale. In addition, lady beetles (such as Chilocorus stigma) and lacewings are commonly found on coniferous trees and are considered to be generalist predators of scale insects. Entomopathogenic fungi, such as Colletotrichum fioriniae (Marcelino et al., 2008) and Conoideocrella luteorostrata (Hywel-Jones 1993), have also been found to impact elongate hemlock scale populations.

Chemical management options for the elongate hemlock scale can include foliar applications of horticultural oils, if complete coverage of the insect can be achieved (on smaller plants). These applications are usually more effective if made while the crawler stages are present and exposed (not covered and protected by the waxy scale of the adult female). Multiple applications per growing season may be required for management of this insect.

A dormant oil application may be made between the end of March and early-April, as temperatures and weather conditions allow.

Horticultural oil (verdant) applications may be made according to label rates between late-May and early-June. Follow label instructions to reduce the risk of phytotoxicity when making any applications. Insecticidal soaps or other contact insecticide active ingredients may may also be used to target the crawler stage.

On larger landscape specimens where complete coverage from foliar (contact) applications is difficult to achieve, systemic insecticides are available for management of the elongate hemlock scale. Homeowners will need to hire a licensed pesticide applicator to apply these materials. The systemic insecticide, dinotefuran, a neonicotinoid, can be effective within weeks of application. Application can be done as a trunk injection, soil drench, or basal bark spray. Bark sprays for elongate hemlock scale have been reviewed with success, although yearly applications may be necessary to achieve management of this insect. Dinotefuran can also protect trees from hemlock woolly adelgid for about 2 years. Although neonicotinoids are toxic to pollinators, hemlock is primarily wind pollinated. For this reason, there is a reduced risk to bees and other beneficial insects, since there may be little to no pollen or nectar that would be attractive to them from hemlock. Please note that another neonicotinoid, imidacloprid, does not manage elongate hemlock scale populations, but is effective against hemlock woolly adelgid.

As with all chemical insecticides, use best management practices to reduce drift, avoid applications during times of day when pollinators are most active or when flowers are in bloom, reduce impacts to non-target organisms, and observe all regulations when applying near schools, wetlands, and other sensitive areas or populations.

Management of elongate hemlock scale can be difficult to achieve, as all life stages of this armored scale insect can be present throughout the growing season, many of which are protected by the hardened scale covering of the adult females. Depending upon the active ingredient selected, multiple chemical applications may be necessary to keep populations down. Follow-up monitoring after chemical treatments should include using a hand lens or microscope to view the scales to determine whether live insects are present.

Additional active ingredients labelled for use against elongate hemlock scale include but are not limited to: abamectin, acephate, acetamiprid, azadirachtin, carbaryl, and neem oil.

Remember when using pesticides that the label is the law. No product should be used in a manner that is contrary to its label. Read and follow all label instructions for safety and proper use. Make sure that the product you select is labelled for use against the pest you wish to manage, on the site to which it will be applied.