The emerald ash borer (EAB) is a non-native, invasive insect that was first discovered in North America in 2002 in Michigan. It is native to eastern Russia, northern China, Japan, and Korea. EAB utilize ash (Fraxinus spp.) as their primary hosts. However, emerald ash borer was found attacking and developing in white fringe tree (Chionanthus virginicus) in Ohio and has most recently been confirmed as able to feed and develop successfully on cultivated olive (Olea europaea). In fact, Cipollini et al. 2017 note that the success of EAB development in cultivated olive is higher than in more resistant native Fraxinus spp. hosts, such as Manchurian ash (F. mandshurica); however, EAB does not develop as successfully in olive as it does in favored North American ash species. In Massachusetts, the primary host trees are white ash (Fraxinus americana), green ash (Fraxinus pennsylvanica), and black (or brown) ash (Fraxinus nigra). As a component of Massachusetts forests, the highest percentages of ash are located in Berkshire County, but these trees are also found in forested areas throughout the state. Ash is also a popularly planted tree in the urban environment.

Since its initial detection in Michigan, it has spread to at least 35 US states and 5 Canadian provinces, including bordering communities in New York, Connecticut, Vermont, New Hampshire, Maine, and Rhode Island. It was first detected in Massachusetts in 2012 by the Massachusetts Department of Conservation and Recreation (DCR) on a purple panel prism trap, when a single adult beetle was found in Dalton, a town in Berkshire County. These traps are 3-sided, purple, and hung within the canopy of ash trees as a method of detecting EAB. They are baited with plant volatiles, chemicals which mimic those released by stressed ash trees. Emerald ash borer is attracted to those chemicals. Since then, detections have been made by the DCR and others in Essex County (North Andover; phone call from a concerned citizen) in 2013, Suffolk County (Boston; trap detection by the Arnold Arboretum) in 2014, Worcester County (Worcester; visual survey by Asian Longhorned Beetle ground surveyors) in 2015, in Hampden County (Wilbraham; phone call from a private arborist) in 2016, and in Norfolk County in 2017 (Brookline; 6 adult beetles were caught in 2 green panel traps deployed by the community and baited with host plant volatile chemical and pheromone – sexual attractant chemical – lures; and Dedham where exit holes and galleries were detected in trees). Additional county detections in Massachusetts include in Hampshire County (2017) in the cities and town of Easthampton, Northampton, and South Hadley and in Bristol County (2018) in Raynham, MA. The Bristol County detection was made by the MA Department of Conservation and Recreation using green funnel traps and lures. Emerald ash borer was confirmed in Plymouth County in West Bridgewater, MA in 2019. MA DCR reports catching two adult beetles in green funnel traps in West Bridgewater. Most recently, in 2020 EAB was confirmed by MA DCR in Charlemont, MA, the first detection in Franklin County. Detections in further towns have been made using visual survey, calls from private citizens, and “trap trees”. A trap tree is created by girdling the bark of an ash tree, causing it to release volatile chemical compounds that are attractive to adult emerald ash borer (like those used in the trap lures). Female EAB will lay their eggs on these trap trees, which are cut in the winter and then have their bark peeled and removed to look for developing larvae below.

The DCR, MA Department of Agricultural Resources (MDAR), and United States Department of Agriculture (USDA) also monitor aggregations of Cerceris fumipennis, a native, ground-nesting and solitary wasp that nests in hard-packed, sandy soils exposed to direct sunlight, such as those found in baseball diamonds and dirt roads. This wasp can be used to monitor for the presence of emerald ash borer in a practice known as biosurveillance. This particular species of wasp is incapable of stinging people. These wasps hunt native Buprestidae, or the jewel beetles/flat headed borers, and bring them back to their subterranean nests where they will lay their eggs on the paralyzed beetles. In areas where EAB exists, they have also been observed bringing the invasive beetle back to their nests. DCR has detected emerald ash borer in a Cerceris fumipennis aggregation in Pittsfield, MA in 2013 (1 adult beetle) and 2015 (1 adult beetle) using this method. MDAR has detected EAB in a new county (Middlesex) in the town of Newton using this method in 2016 along with a find in Boxford, MA in Essex County, adding to the list of towns known to have EAB.

Like all beetles, the emerald ash borer undergoes complete metamorphosis (is holometabolous) with four life stages: egg, larva, pupa, and adult. Adults are a dark green metallic color and approximately ½ inch long. They are the only Agrilus species in North America known to have a bright metallic coppery-red (may also appear purple) dorsal surface of their abdomen. (The wings must be lifted to see that feature.) Larvae are white, 1 to 1.25 inches long at maturity, have a small brown head, a pair of brown pincers at the end of the abdomen, and have bell-shaped abdominal segments. The fourth instar larvae overwinter in a pre-pupal stage in a J-shaped position. Pupae are present in the spring and look like cream-colored adults that begin to darken as they develop. The larval and pupal stages are found beneath the bark of their host trees, as the larvae feed on the nutrient and water conducting tissues of the plant. Adults emerge in May and June and mate and lay tiny, flat, oval shaped eggs that are initially whitish-yellow in color and turn reddish-brown as they develop. Eggs are difficult to see as they are approximately 1/32 of an inch and laid in cracks and crevices of the bark. On average, females can lay 55 eggs in their lifetime, but some have been observed laying more than 150 eggs. Adult emergence creates D-shaped exit holes in the bark. 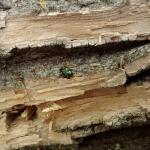 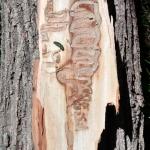 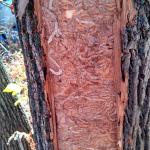 Although adult emerald ash borer will conduct some maturation feeding (on ash foliage), it is the larval stage of this insect that causes the most amount of damage to ash trees. The larvae feed in the nutrient- and water-conducting tissues beneath the bark, which can lead to the eventual girdling of the tree. This damage can be seen as S-shaped galleries when bark is removed. Vertical splits or cracks can also form in the bark over these larval galleries. Heavily infested trees exhibit canopy dieback, beginning at the top of the tree. Some ash trees will push water-sprouts or epicormic shoots from their base or branches. D-shaped exit holes are created by the emerging adults. “Blonding,” or evidence of woodpecker feeding activity on emerald ash borer larvae, may be visible on the bark. This occurs as the woodpeckers forage for the insects, leading to bark removal. This can be a very visible sign that there may be emerald ash borer present. Emerald ash borer will attack healthy ash trees, although adults may prefer to feed on or lay eggs on stressed trees. When emerald ash borer populations are high, small trees can die within 1-2 years of initial infestation, while larger trees may take 3-4 years before succumbing to this pest. 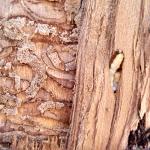 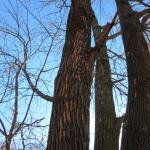 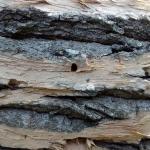 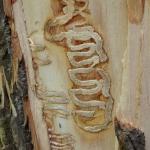 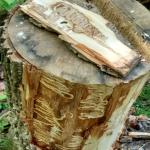 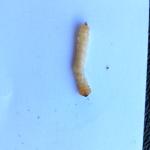 Management for emerald ash borer depends on whether or not the insect is present, the location of the ash tree(s), and what you wish to achieve with your trees. If you are in an area that is not known to have emerald ash borer, some cultural practices can discourage the movement of this insect. While all of Massachusetts is under a quarantine for this insect, movement of ash host material and firewood throughout the state is discouraged. For example, emerald ash borer is not yet known to exist in certain parts of Massachusetts, such as Franklin County. Therefore, it would be prudent to avoid moving ash materials to these counties from areas of the state with known infestations of emerald ash borer. While the adults of this insect are strong fliers and capable of moving large distances on their own (at least ½ mile from the tree they emerge), discouraging the movement of infested ash materials by humans will help to slow the spread of this insect, since humans are capable of moving EAB much further than it could disperse unaided. The movement of firewood has been implicated in playing a large role in the spread of emerald ash borer. Many of our surrounding states have legislative bans on bringing in out-of-state firewood, and this practice should be highly discouraged. Bordering states of Vermont, Maine, Rhode Island, and parts of New Hampshire are not known to have emerald ash borer at this time. Permits and certificates from the USDA-APHIS are required for industries and businesses wishing to move ash materials and firewood to areas not quarantined for emerald ash borer.

The US Forest Service has conducted research suggesting that, in a forested setting where EAB is present, the removal of large diameter ash trees may significantly decrease the number of emerald ash borer adults that could be produced by the stand, while preserving the smaller diameter ash trees. A very small percentage of North American Fraxinus spp. have been found to show signs of resistance to emerald ash borer, although it is not certain to what extent this will help ash survive this insect.

Chemical management options are available for ash in a landscaped or urban forest setting if preservation of specimen trees is desired. Insecticide treatments are generally suggested if the location of the ash in question is within approximately 15 miles of a known emerald ash borer infestation, as preventative treatments have been found to be effective. However, if a tree you wish to protect is already showing signs of emerald ash borer infestation, chemical management options have been effective if applied before the crown exhibits more than 30% dieback due to this insect. Various products are available for the management of this insect. Since EAB is a wood boring beetle, chemicals that move into the tissues of the host plant (systemically) are most effective to target the larval stage of the insect. Canopy sprays are not recommended. Emamectin benzoate, a restricted use insecticide, can be applied as a trunk injection. Two neonicotinoid active ingredients, imidacloprid (soil drench, soil injection, or trunk injection) and dinotefuran (basal bark spray), are also taken into the plant systemically. Dinotefuran is currently state restricted use in Massachusetts. Although ash is primarily wind pollinated and any risks to pollinators are reduced, research has shown that treatments with these chemicals may still be effective if done after the ash tree has flowered. Another active ingredient, azadirachtin, may also be applied as a trunk injection and offers systemic management toward emerald ash borer. Some products using azadirachtin are labelled for organic use. A comprehensive, research based publication discussing these different active ingredients and more, and how and when they may be applied to best manage emerald ash borer, can be found online at the emeraldashborer.info web page mentioned below. This publication is entitled: “Insecticide Options for Protecting Ash Trees from Emerald Ash Borer” by Herms, et al. This publication discusses active ingredients including azadirachtin, bifenthrin, carbaryl, cyfluthrin, dinotefuran, emamectin benzoate, imidacloprid, and permethrin for emerald ash borer management. A Massachusetts licensed pesticide applicator should be consulted when considering any of these options, and the associated risks and benefits should be discussed.