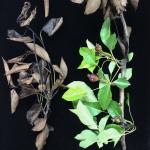 Fire blight is most common and severe on apple/crabapple (Malus) and pear (Pyrus). While many other rosaceous plants can serve as hosts (e.g. Cotoneaster, Crataegus and Sorbus), the disease is uncommon outside of apple and pear.

The disease typically first appears as a blossom blight after wet and mild weather in May, but quickly spreads to infect fruit and current year's shoots and foliage. As the disease progresses, older stems and branches can become infected and die. Infected shoot tips often curl, a symptom known as a "shepherd's crook". Leaves, petioles, fruit and stems infected by Erwinia have a distinctly blackened appearance, which is why the disease is known as fire blight (blackened by fire). Signs of infection include oozing cankers and mummified fruits. The bacterial ooze is generally cream- to orange-colored and may extrude from branch/trunk cankers and lenticels or from young shoots. However, bacterial ooze is often not visible or present in the field at the time of observation. Once plant parts are killed, they are typically colonized by other opportunistic cankering pathogens, making pathogen identification complicated as the growing season develops. The bacterium overwinters in diseased tissue, mostly at the edges of branch and stem cankers. Warm and wet weather facilitates pathogen development in the spring and E. amylovora is often dispersed by splashing rain, wind and pollinating insects. Trees are most susceptible to infection when they are in bloom, with susceptibility dramatically decreasing before and after the bloom period. Noticeable blight symptoms arise approximately one to three weeks after infection, with symptoms appearing more rapidly during prolonged periods of wet and warm weather.

Proper identification is critical to managing fire blight. The blackened appearance of infected plant parts will be uniform on leaves, petioles and stems. Canopy dieback without a blackening of these tissues is unlikely to be caused by fire blight. Pruning out blighted stems and branches, at least 8–10″ away from symptomatic tissue (if possible), can effectively manage the disease in the landscape. However, scouting and pruning must occur regularly to ensure the pathogen does not become well established in the canopy. Disinfest tools regularly using bleach or ethanol. Maintain an open canopy to improve sunlight penetration and promote air flow. This helps to limit free moisture on plant surface, which is necessary for disease development. Many bactericides are registered for use against fire blight but some are not for use on fruit intended for human consumption. See label for details. These chemicals include: copper hydroxide, copper sulfate, copper salts of fatty and rosin acids, steptomycin sulfate, phosites, fosetyl-aluminum, mancozeb, and mancozeb+copper hydroxide.