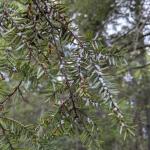 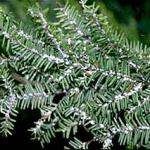 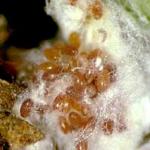 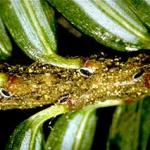 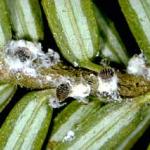 The hemlock woolly adelgid (HWA; Adelges tsugae) is an invasive species introduced to the eastern United States in 1927. Native to Japan, the hemlock woolly adelgid was first detected in Massachusetts in 1988 from an already existing infestation in Connecticut where it was previously reported in 1985. It attacks the Carolina and eastern (Canadian) hemlock and is capable of severely weakening and killing its host plants. Trees that are healthier prior to infestation may endure longer, but previously stressed plants may die in 3-5 years. The key to its management is to recognize it early and implement the proper management strategies.

Both forest and ornamental hemlock trees can be hosts for hemlock woolly adelgid. All hemlock (Tsuga spp.) can be affected, but some are much more susceptible. Japanese hemlock (Tsuga diversifolia and T. sieboldii) are relatively unaffected by HWA in Japan because of host resistance and natural predators. Hemlocks native to the northwestern U.S., such as mountain hemlock (Tsuga mertensiana) or western hemlock (T. heterophylla), show some resistance to HWA, but may not grow well outside of their native range. Native northeastern U.S. hemlocks, the eastern hemlock (Canadian hemlock;Tsuga canadensis) and the Carolina hemlock (Tsuga caroliniana) show no resistance to HWA and have been negatively impacted. Forested trees and ornamental plantings have been killed by this insect.

HWA moves passively to new hosts via wind, animals, such as birds, deer and squirrels, and humans via the movement of nursery plants and equipment. It is estimated to expand its range at a rate of 15 km/year in the south and 8 km/year in the north (Evans and Gregoire 2007, Biological Invasions).

Hemlocks growing in stressful sites (compacted soils, ledgy soils, poor drainage, drought prone, etc.) are much more apt to succumb to HWA infestation within 3-5 years. Hemlocks in more natural (healthier) settings, such as the forest, have been shown to withstand infestations longer, some persisting (yet unhealthy) for decades.

The hemlock woolly adelgid (HWA) is a tiny insect that is closely related to the aphids. Adelgids, in general, are associated with conifers and produce galls and or woolly masses. In the United States, HWA only produces woolly masses, which resemble the tip of a tiny cotton swab and are particularly apparent on the underside of hemlock branches at the base of needles. (In their native range, hemlock woolly adelgids produce a gall on an additional host, tiger tail spruce, Picea torano. This species is not present in the Northeastern United States.)

This insect is atypical of most insect species in the Northeast in that it is inactive for much of the growing season and very active throughout the winter.

HWA has four forms known as progrediens (April and May), sistens (July - March; overwintering generation), sexuparae, and sexuales. Each of these forms goes through the following life stages: egg, nymph (4 instars), and adult. Adult females are approximately 1/16th of an inch in length, black, and circular in shape. They can be found feeding at the base of the needles, covered with a white, fluffy wax that may look like mini cotton balls at the base of the needles. Crawlers and nymphs are smaller, black in color, and sometimes ringed with a fringe of white waxy material. In the northeast, all hemlock woolly adelgids are female and reproduce parthenogenetically. HWA does most of its feeding during the cooler parts of the year, and completes most of its development from October through June. During the summer months, it spends its time as a first instar nymph (which is very difficult to see) at the base of hemlock needles in a summer dormancy known as aestivation. This generation (sistens) overwinters, and the females produce viable eggs in February and March the next year. Approximately half of those eggs develop into winged, migratory sexuparae who mature into adults and migrate to a spruce host (as mentioned above: tiger tail spruce, Picea torano; not present in the US), where sexuales develop and a gall is formed. (Recently, in the US, massive migrations of the sexuparae have been reported on beaches in the Northeast. See Havill et. al 2022: "Mass deposition of hemlock woolly adelgid sexuparae on New England beaches" in the Journal of the Acadian Entomological Society.) The remaining sistens eggs become progrediens which develop into adults which remain on trees into June and July and produce eggs. These eggs hatch and become the crawlers (nymphs) of the sistens generation which settle at the base of needles and aestivate until October (Johnson and Lyon, 1991). The hemlock woolly adelgid is considered non-native to the eastern US (native to Japan and China), but native to the western US where western hemlock is mostly resistant.

Hemlock woolly adelgids feed on hemlock by inserting their piercing-sucking mouthpart, or stylet bundle, into the tree through epidermal cells until it reaches the vascular bundle. Then it probes through the vascular bundle until it reaches xylem ray parenchyma cells, drinking the cell’s contents. By reducing the hemlock’s store of carbohydrates, HWA weakens the hemlock and increases its susceptibility to other stressors, such as drought and elongate hemlock scale. On affected trees, the ability to move water is reduced, so needles dry out and turn grey or yellow. Early needle drop may occur. Buds may also be killed, resulting in reduced new growth and dieback. Within a few years, major limbs begin to die from those closest to the ground up. In as little as two years, the tree may die, although in healthy trees it may take much longer, 10-12 years. As the tree weakens, it produces fewer carbohydrates, and may become a poor host for the HWA.

Monitor for cottony egg sacs on twigs at base of foliage starting in late February through June and again in the late summer into the fall. Check the lower branches first. Use a hand lens to observe the insects under magnification. At least 10X magnification is required to observe the presence of eggs and egg hatch beneath the waxy ovisacs in the spring. Large hemlocks that act as windbreaks may be a good place to begin scouting, as they may be the first to be infested by windblown HWA. Active infestations should be managed, as HWA can multiply quickly on a suitable host, and to prevent spread to new hosts.

Promoting hemlock health before and during infestations of HWA is crucial to encouraging survival in managed landscapes. Hemlocks are shallow-rooted, and therefore benefit from one inch of water per week, either through precipitation or irrigation. Pruning to remove dead branches allows more light to reach the tree’s interior and promotes new growth. One important caveat to this: do not fertilize hemlock trees with current HWA infestations. Increasing nitrogen available to a hemlock tree increases the amount of nitrogen in the sap fed on by HWA, possibly leading to more eggs laid and a potentially larger infestation.

Localized infestations can be treated through pruning and destroying affected branches.

Remove bird feeders and houses from or nearby hemlocks- discourage birds and small mammals from nesting as they may assist in distributing or spreading HWA.

Because there are currently no known parasites of adelgids, the biological control of hemlock woolly adelgid has focussed on national and international searches for predators and pathogens that may reduce HWA populations. Historically, three beetle predators (Sasajiscymnus tsugae, Laricobius nigrinus, and Scymnus sinuanodulus) have been released widely in the eastern United States for the biological control of the invasive hemlock woolly adelgid. Additional predators from China, Japan, and western North America continue to be researched.

Two species of silver flies from the Pacific Northwest may be potential biological control agents of hemlock woolly adelgid in the eastern United States (Leucopis argenticollis and L. piniperda). Both species are predators of hemlock woolly adelgids that are native to the western United States and it is hoped that they could help reduce the introduced population of HWA in the eastern US.

There are several chemical options for managing hemlock woolly adelgid. Horticultural oils and other reduced risk management options are preferred for their low environmental impact, but systemic insecticides provide long-term management of this insect.

During the dormant season, HWA infestations can be treated, coating them thoroughly, with dormant oils, if feasible. During the growing season, insecticidal soap can be applied, targeting the crawler stage, as a reduced risk contact insecticide option.

Two examples of insecticide active ingredients with systemic properties that can be used to manage hemlock woolly adelgid are: imidacloprid and dinotefuran. Imidacloprid has been shown to take several months to take effect after application, but research suggests it may protect trees from hemlock woolly adelgid for up to 5 years. Imidacloprid has not been shown to effectively manage the elongate hemlock scale (Fiorinia externa). In cases where a hemlock is infested with both the elongate hemlock scale and hemlock woolly adelgid, dinotefuran is an active ingredient that can manage both insects. Dinotefuran is water-soluble, moving into and through the tree much faster; it may be effective within weeks of application. Dinotefuran may protect trees from HWA for approximately 2 years, according to research. Both imidacloprid and dinotefuran are neonicotinoid insecticides and are both currently state restricted use in Massachusetts.

Imidacloprid and dinotefuran can be applied as trunk injections, soil drenches, or basal bark sprays. The basal bark spray application is made when the product is applied to the bark of the tree from the root flare up to approximately 5 ft. high on the trunk. Specialized equipment is often needed to make these applicatons - consult with a licensed arborist and pesticide applicator. Neonicotinoid insecticides cannot be applied to trees or shrubs in Massachusetts except by an individual with the proper licensure or certification from the MA Department of Agricultural Resources. Special care must be taken when using imidacloprid or dinotefuran due to toxicity to bees and other pollinators. However, with some of the aforementioned application methods (such as injections or basal sprays), risks to pollinators can be greatly reduced as these application methods greatly reduce the risk of drift. Avoid applying insecticides to plants in bloom.

Additional active ingredients that can be used to manage hemlock woolly adelgid include but are not limited to: abamectin, acetamiprid, Chromobacterium subtsugae, cyantraniliprole, and pyrethrins. When using pesticides, the label is the law. No product should be used in a manner that is contrary to its label. Read and follow all label instructions for safety and proper use. Make sure that the product you select is labelled for use against the pest you wish to manage, on the site to which it will be applied.

Once hemlock woolly adelgid is in any given area, it will constantly pose a threat to all native hemlock. However, keep in mind that trees vary in their response (including the length of time they survive) to this insect depending upon tree health prior to infestation. Mature trees and trees planted on stressed sites may be the first to succumb to the hemlock woolly adelgid. Trees on healthy sites in forests in Massachusetts have in some cases persisted with adelgid infestations for decades, but often with reduced vigor and impacts to the ecological functioning (pre-HWA infestation) of the forest.