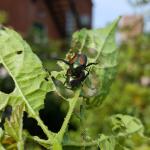 The Japanese beetle is an invasive insect native to Japan. It was introduced to the United States in New Jersey in 1916. Since then, it has spread widely throughout most of the eastern United States, and some western states including Arkansas, Iowa, Kansas, Minnesota, Missouri, Nebraska, North Dakota, Oklahoma, and South Dakota. Japanese beetle adults feed on over 300 species of plants, including trees, shrubs, flowers, and food crops. Larvae cause significant damage to grasses, often destroying turf in golf courses, lawns, and parks.

Japanese beetle larvae (also known as grubs), feed on the roots of many turfgrass species.

An adult Japanese beetle has a metallic green head and thorax, and shiny copper brown wings. There are five patches of white bristles (hairs) on the abdomen to the left and right of the wings (on the sides), and two more behind the wings (at the end of the abdomen), making twelve in total. The patches behind the wings are slightly larger than the ones on each side. Beetles are oval shaped and between ⅓ and ½ inch long.

There is one generation of Japanese beetles per year; however, in some northern parts of New England, some Japanese beetle grubs may take 2 years to mature. After overwintering as a 3rd instar larvae 12 to 18 inches deep in the soil, the grubs awaken in spring, migrate to the top 1 to 2 inches of soil, and begin feeding on grass roots to prepare for pupation. In mid-June, 3rd instar larvae form a ½ inch-long shell around themselves out of earth and pupate for 1-3 weeks. Adults emerge over a two month period starting in late June/early July, with the peak number per day emerging around August 1, and then tapering off to the last emerging adult by September 1. (Timing varies in warmer climates.) Immediately adults start to feed, flying as far as a few miles to find a suitable host. Beetle damage on leaves creates volatile odors that attract even more Japanese beetles, resulting in large numbers of beetles on the same host. Japanese beetles feed during the day, on the sunnier tops of leaves, flowers, and fruits, working from the top of the plant to the bottom. Females release a sex phermone to attract males. Mating occurs, then the females lay eggs 2-4 inches deep in the soil of a section of turf (including golf courses, lawns, pastures, etc.). The female lays 1-3 eggs in the soil at a time, then emerges from the soil to feed and may even mate again. One female may deposit eggs up to 16 times, laying between 40-60 eggs total. Eggs are about 1.5 mm long and range from translucent to white. As the embryo develops, the egg doubles from its initial size. Egg hatch occurs 10-14 days after being laid. First instar grubs feed for 2-3 weeks, then molt and feed again. Three to four weeks later, the second instars molt into third instars. Most grubs have reached the third instar by the fall. When temperatures dip below 50 degrees Fahrenheit, grub activity stops and they burrow deep into the soil to overwinter.

Both adults and larvae cause damage, but in different ways.

Adult Japanese beetles damage leaves, foliage and flowers by feeding on them with their chewing mouthparts. Leaves are skeletonized, creating a lace-like network of holes, resulting in browning and premature leaf drop. Flowers and fruits become unsightly and unmarketable. However, most adult Japanese beetle damage tends to only be aesthetic. Typically, their feeding does not harm the overall health of the plant, if the host plant is otherwise healthy.

Larvae, on the other hand, feed on the rootlets of grass and stop the roots from being able to take up water and nutrients. This results in turf discoloration, the ability to pull grass out of the soil easily, and, in severe infestations, death of large patches of the grass.

Visual checks can be done frequently for the adults on favored plants. The adults are sun-loving and are usually more concentrated on the plant tops or sunnier sides. Favored hosts in sunny locations are more likely to be attacked. Also, adults are more active and prevalent during the hotter/sunnier part of the day.

Monitoring for larvae involves multiple random sampling of one square foot area. Carefully cut a square, with one foot sides, on 3 of the four sides. Lift the turf, record the number of grubs per square foot, and then replace the turf. Slight tamping and watering should leave the sampling virtually unnoticeable. Repeat the process in several areas and calculate the average number of grubs per square foot. Many different grubs look like this pest. Proper identification of species is essential and relatively easy by examining the raster pattern at the tip of the abdomen. Most turfgrass species, that are healthy and not under additional stress, can tolerate up to 8-10 grubs per square foot. (Stressors such as drought or foot traffic may change that to less than 5 grubs per square foot.) To learn how to identify common grub species in turf, visit: White Grub Identification.

The use of commercially available pheromone traps for capturing adult Japanese beetles in ornamental landscapes has been controversial. Research has shown that trap placement can increase the level of injury to the surrounding plants in the landscape when traps attract more Japanese beetles than are killed. For this reason, if using commercial Japanese beetle traps to monitor for adult emergence, place traps far away from high-value, favored host plants to avoid any accidental damage. However, research done in elderberry and blueberry orchard systems has shown that certain mass trapping designs can capture high numbers of Japanese beetle adults with comparatively few adults and little feeding damage observed on host plant foliage. In those systems, mass trapping may provide alternative management options (Pinero and Dudenhoeffer, 2018). If you choose to try traps for monitoring Japanese beetles or removing some of the population in a managed landscape, do so with caution. Some Extension programs recommend placing traps at least 50 feet away from the plants you want to protect and emptying traps frequently to avoid overflowing traps that may allow attracted beetles to escape into the nearby landscape.

Japanese beetle management requires different strategies depending upon whether or not adults or grubs are the stage being managed. Decisions about management might also differ depending upon the host plants or site. For example, adults may be more difficult to manage as they are able to migrate (fly) to different locations. Management of the adult life stage of this insect on a tree or a shrub will be different from the management of Japanese beetle grubs in turf.

Planting trees and shrubs that are not preferred by the Japanese beetle (when possible) can help reduce issues with this insect on specimen plants in managed landscapes. Trees and shrubs known to be less preferred by this insect include but are not limited to: arborvitae, boxwood, dogwood, forsythia, ginkgo, hemlock, hickory, holly, juniper, lilac, magnolia, northern red oak, red and silver maple, redbud, rhododendron, spruce, sweetgum, tuliptree, and yew. Keep in mind that these options may have other significant insect pests in your area. (Ex. arborvitae, boxwood, hemlock, magnolia, etc.)

For small populations of adults, hand-picking Japanese beetles off target plants may be an option. During the sunniest part of the day, pick the beetles off the plant and drop them in a bowl of soapy water.

Eggs and larvae require moisture to develop, so reducing irrigation in August, during peak beetle emergence, may discourage females from laying eggs in the affected sod. This may be particularly effective during dry summers, but should be balanced with the benefits/costs of irrigating vs. not irrigating in that location.

Several natural enemies target Japanese beetles during various stages of their life cycle. Some of these options are only for eggs, grubs, pupae, or adults:

Adult Japanese beetles may be managed with contact insecticides on high-value trees and shrubs, however appropriate precautions should be observed. Do not treat host plants when in bloom to protect pollinator populations. The efficacy of these materials for managing Japanese beetle adults may vary. Pyrethrins and neem-based products may provide shorter-term management of the adult beetles and come with fewer risks to the environment. Additional active ingredients that may be used to manage Japanese beetle adults include but are not limited to: bifenthrin, carbaryl, cyfluthrin, and permethrin. Due to the long activity period of the adult beetles, multiple applications may be required if allowed by the product label. This makes managing adult Japanese beetles on trees and shrubs very difficult, and some do not recommend it in managed landscapes. As mentioned previously, most adult Japanese beetle damage tends to only be aesthetic. Typically, their feeding does not harm the overall health of the plant, if the host plant is otherwise healthy - so managing this insect on ornamental trees and shrubs may be optional.

Always read the entire label of any pesticide product before use. Ensure that you are using it in a manner consistent with the labeling. The label is the law. No product should be used in a manner that is contrary to its label. Read and follow all label instructions for safety and proper use. Make sure that the product you select is labelled for use against the pest you wish to manage, on the site to which it will be applied. Do not apply systemic insecticides, such as neonicotinoids, to plants in bloom. Neonicotinoid insecticides cannot be applied to trees or shrubs in Massachusetts except by an individual with the proper licensure or certification from the MA Department of Agricultural Resources.